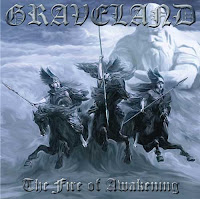 The Fire of Awakening is the 7th full-length from Rob Darken's legacy under Graveland. Like most of his work, it's an acquired taste with a number of flaws, which taken in context, are not exactly flaws...but still have a tendency to test the listener's patience. What happens here is the natural union of some lush, amazing atmosphere bathed in angelic synthesizers, and the barbaric, plodding, often quite boring guitar rhythms that broil below. Add to this the relative length of each track, from 8-10 minutes long, and the fact that most of the album slides along at the same general pace...and you've got either a recipe for headache, or a brilliant 47 minutes of heathen glory.

Although I find myself leaning towards the latter concoction, I cannot say that this is one of the best of Graveland. It's good, and shows a marked improvement in Rob's ability to conjure atmosphere through very minimal means...but the guitar riffs afford so little interest, that their mere bludgeoning alone cannot support them. What I do appreciate is the way the entire album sounds like a steady war march, if you listen carefully, with eyes closed, the rhythm of the crashing drums can often become hypnotic, sucking you straight into the ages past, your boots tramping through the sludge of human carnage and the cold moors. The keyboards are really well played here, though they create nothing but simple, ethereal lines that truly sound like the valkyries calling you skyward after an honorable death. He'll often use a subtle melodic guitar line speed picked along the synth notes to create a great harmony. The album definitely has its moments, but 47 of them?

"We Shall Prevail" begins with the choir of valkyries, before a slowly paced sludge rhythm drives straight through some smaller, melodic lines. This slowly builds in momentum, like a charge that never fully breaks, and though broken up with more atmospheric provisions, the track doesn't really meet a satisfactory climax. Instead, it bowls over and the "Battle of Wotan's Wolves" takes over. This is my least favorite track on the album, though the most raw in terms of just pounding away with the guitars. Darken is wielding his standard garbled, harsh vocals, never quite so aggressive as many other singers in the genre, but sufficient and no surprise if you've heard his past albums. "In the Sea of Blood" is the most mercifully brief track, under 8 minutes, but the style does not defer from what has come before. More trudging. More guitar melodies skirting alongside the slow march of the cavalry like starved and hungry hounds that seek the mercy of their drivers.

No more love, neither mercy
The red Sun has hidden herself
Their fear born from our hate
Kindles fire and ash

If you've survived this far, then you can probably handle the final two tracks, which are both 10+ minutes in length. "Die for Freedom" is quite extravagant, with epic battle percussion and more of Rob's graceful synth work. It breaks for rations by the midpoint, but wastes little time in retrieving the thunder. I can't help but feel 2-3 minutes less here would have condensed the song into a superior force, because it seems right as it grips you it just keeps rambling on. The closer, "The Four Wings of the Sun" arrives with an extremly glorious opening riff, slow and crunchy and slathered in great picking lines. Again, over 10 minutes, but have patience, and you will be rewarded, for the synths in this track are yet again beautiful over the crashing percussion and the stable if repetitive guitars. The tranquil break at around 6:20 is emotional and helps reel you back in, and this is the strongest overall track.

If an entire album of slower paced, barbaric majesty set aloft by some refined synth ambience is what you find yourself in need of, then look no further. The Fire of Awakening offers little else. Some better guitar riffs, and more diversity of tempos would have surely livened the effort, but Graveland fans should still be pleased. I should mention that the two albums after this, Dawn of Iron Blades and Fire Chariot of Destruction, are both better records, some of the best of his career. If it's your first exposure, you may want to track those down instead. Otherwise, I'll meet you by the morning fog, cold spear in hand, cracked and frosted helm, and the end in my eyes.

Highlights: In the Sea of Blood, The Four Wings of the Sun