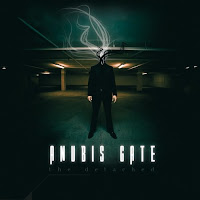 Jacob Hansen is a busy man, having to divide his time between three pretty damned good bands: death/thrash luminaries Invocator, Danish prog metal gods Beyond Twilight, and yet another progressive metal band of some notoriety...Anubis Gate. But if he can continue pushing material this catchy and consistent, who is complaining? This is actually only the second Anubis Gate album Hansen has fronted, replacing Torben Askholm who left a few years ago. This is also the 4th full-length of Anubis Gate, and in my opinion, their most interesting yet, from its sleek modern cover image to the many weapons it brings to the battle.

Hansen's vocals are angelic; he is one of the few vocalists (along with Nils Rue of Pagans Mind) who can produce such crystalline highs but maintain their leverage and power, perhaps not hitting the range of Geoff Tate in his prime but highly pleasing throughout the 12 tracks of The Detached. The rest of the band surges with creativity, seemlessly intertwining the air of graceful leads with deep, thrashing rhythms and a myriad of electronic elements which fuse well (another similaritty to Pagans Mind). This album stands tall throughout its rockers: the complex impact of "Find a Way (or Make One)", the atmospheric and epic "Yiri", and the even longer "Pyramids"; as well as its subtle moments, like the shining and brief ballad "Ammonia Snow" and the breathy prog rock of "A Lifetime to Share" (not as dopey as the song title, I promise).

A free man versus caged inhabitant
on his own land
The mirrored face bewildered,
a fierce contraction
Reaction

The Detached is top of the line in terms of its mix, which is bright and bold, almost melodic enough to serve as a ray of sunshine, scorching the hides of nightbeasts and sending them rearing back into the shadows. Despite the elegance of the band, they manage to keep the tone of the music serious as opposed to flowery, and along with their closely knit comrades of Beyond Twilight, they stand at the top of this game. Not every track on this album slays, but most will at least put a spike of light through your mind.

Highlights: Find a Way (or Make One), Bloodoath, Yiri, Pyramids