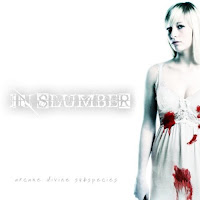 In Slumber is an Austrian band who morphs black and death metal into a modern style, for better or worse. While the band is perfectly capable of carrying a good melody or providing an authentic moment of atmosphere where needed, Arcane Divine Subspecies is simply slathered in too many terrible breakdowns and overbearing snarls and growls that recall a lot of the less memorable melodic death metal from both Europe and the US. The band's sound actually compares with recent output from Sweden's Hypocrisy, in that it packs so much into a dense record, but that band doesn't need quite so many mosh pit rhythms to enforce its point.

I must not travel very far to make my point, for even the first track on the album displays this tendency. "Bleed in Vain" starts with a charge, the drums slamming and guitars blazing, before the big melodic hook arrives (similar to something Hypocrisy might do) and the band breaks into a more grooving rhythm. Then, even though the first half of the song isn't that bad, the band busts out an uninspired, shitty breakdown at around 2:30 which nearly put me into slumber. "Patchwork Masquerade" is another example, the song has some pretty good leads and I liked the scintillating acoustics in my ears, but the breakdown grooves make it feel more like a band of 13-year old metalcore kids than members of Thirdmoon and Eluveitie. Most of the songs follow this pattern, but unlike some similar albums, the complete effort does not entirely disintegrate as a result. "Fragile Synthetic Order" has some nice, mechanical rhythms which seem a fine bridge between the poles of Hypocrisy and Fear Factory, and "Hatepath Engine", "Razorblade Balance" and the electro enhanced "Pain Priority Injection" all have some moments of delivery.

Arcane Divine Subspecies has a modern, futurist mix which some might consider too polished and sterile, like a Soilwork album. But for this style of metal, it's a given. The guitars bounce, the synths are present but not too overbearing, and the melodies pierce through lovingly. The vocals here are a smorgasboard of death and black, but they don't really add much to the songs, since you've heard them a thousand times before. In Slumber does not suck, but the album left much to be desired, and these musicians are likely capable of better.