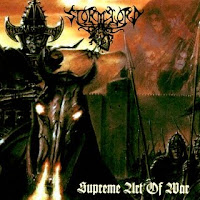 Though the Italian band Stormlord's keyboard-driven, 'epic' brand of metal was ahead of the curve (think of how many bands today use this formula), it was quite slow in getting to the point it now lies with the excellent Mare Nostrum. Supreme Art of War was the band's first proper full-length, after a few mediocre EPs and demos. The style was a mix of black, power and melodic death metal, with plenty of keyboards and both male and female operatic choral vocals, and though the record has its moments, I felt the mix of styles really fell on its nose here.

Part of the fault lay in the production. It's not hideous, but the mix of churning, low guitars, epic synthesizers, thinner guitar tone for the melodies and speed picked rhythms, off the hook Dani Filthy snarling sounds rather scattershot, and the choral vocals simply sound silly, as they often overpower everything else in the band, and it becomes hard to take seriously. And unfortunately, this happens in almost all the songs. Even the stronger, charging tracks like "Immortal Heroes" and "Supreme Art of War" are short-reigned when the female vocals enter the picture and foul them up. The double bass is quite flattening, but the rest of the kit languors behind the guitars. And speaking of the guitars, they seem too intent on meshing with the keyboards to ever produce much in the way of excellent, memory riffs; though they do get their gallop on. The lyrics are cheesy, but functional. I like that the band has always stuck to their guns, Roman and Greek history and myth have so many tales worth telling through metal music (though they have meandered outside the period on occasion).

Immortal Champions bringers of freedom,
the cruel tyrant defeated he weeps
century of madness are ending this day,
Lords Of The Storm your wisdom we enthrone

There is a genuine energy to the writing, and I feel perhaps this must have come off better live than in the studio debut, but it's hard to shake the feeling that Supreme Art of War sounds like a group of Renaissance Faire/LARPer dorks getting together with that one cool girl from the college choir to record an extreme metal album. This time out, at least, it wasn't happening for me, but to their credit, Stormlord is one of those bands to improve with each release. You can hear that in The Gorgon Cult, and certainly Mare Nostrum.

Highlights: the blacksmith, the glassblower, the venison, and the joust for the good maiden's heart

Verdict: Indifference [6/10] (ram the crosses so they all can see)