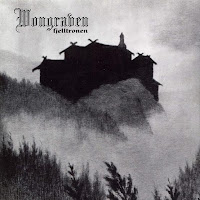 Similar to how Storm was a collaboration between Fenriz of Darkthrone and Satyr of Satyricon (with Kari Rueslåtten adding her vocals), Wongraven was the collaboration of Satyr and Ihsahn (Emperor), with additional percussion from Hans K. K. Sřrensen. However, the difference here is that Wongraven is not a metal band in the slightest, but an epic, medeival ambient folk project featuring an expressive array of vocals and synths, seasoned in acoustic guitars, bass, timpani, mouth harp and other instruments. This is the sole full-length release from Wongraven, but it does possess some staying power, especially if you enjoy this brand of dark, period ambience.

Half of Fjelltronen consists of a single, 16 minute track called "Det Var En Gang Et Menneske", which meanders endlessly from the rolling, sparse percussion and whispered vocals of its opening moments through a long stretch of keyboard that sluggishly dominates the faint, sparkling acoustics. The drums crash in and out as if to accent moments of authority, and the final few moments of the track become quite haunted...with the repetitious acoustic and darker, somber keyboard tones, and Satyr's vocals growing into an eerie crescent. Once you are through this behemoth and into the clear, you are met with "Over Ødemark", a doomed piano dirge with Ihsahn's fingers all over it, and Satyr joining in for the final half. "Opp Under Fjellet Toner En Sang" is under two minutes of grace carried through synthesized woodwinds and an ambient backdrop, before the other substantial track on the album, "Tiden Er En Stenlagt Grav" kicks in for a slowly building, instrumental. The bass here is hypnotic as it flows below the subtle synths in a folk lick. The track fades out and returns with some more of the project's, haunting atmosphere, though there is a swagger to the piece which should rouse the historic traveler within all of us. Another instrumental, "Fra Fjelltronen" offers closure, with over 3 minutes of bells, haunted castle environments and dying medieval thunder.

As with many such offerings, the appeal will be limited to those who do not mind a largely instrumental slice of atmosphere that can haunt your dreams and suck your thoughts into a dark mirror of the past...half real, half idealized into a grim, impossible portrait. Though there are words, and vocals, they truly merge in with the landscape of the instruments, soaring forth only to bait you with stark, glorious contrasts. I would definitely recommend this album to any fan of Summoning, Vinterriket, or early Mortiis. In fact, add some black metal to this and you would have the first few releases of Summoning, so I'm guessing it was a possible influence to their Tolkien-inspired path. Fjelltronen is not an absolute classic, and I thought Storm was a more successful side-project, but it shows a great deal of depth to the imagination of Satyr, and might make for a good companion piece to the first two Satyricon albums.