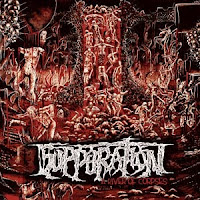 Beto Martinez is no newcomer to the brutal death metal scene of Colombia, having taken part in 8-9 albums in the 21st century through his various projects (Ancient Necropsy, Amputated Genitals, Purulent, and this Suppuration). A River of Corpses is the 2nd slab of slaughterhouse gristle from this particular band, and offers a fairly run of the coffinwood mill experience. Intense drumming and gutturals (both courtesy of Martinez, or 'Dying Betus'), ooze-thick churning guitar rhythms, and mixed parts blast and slam, you could pick out almost any brutal underground band at random from North & South America and hear something similar. That is not to say Suppuration are particularly offensive or necessarily bad at this style, but one could probably find a far better way to kill 30 minutes than this album.

A River of Corpses hints at some technicality, but often this is just a string of chugging pit rhythms that the band crashes through at high speed, breaking for a slam here or a thrashing rhythm there. Martinez has some solid chops, his hands and feet motoring away with ligament-tearing intensity. Julian's guitars are thick and brutal, but aside from repeating a bunch of mediocre rhythms, there's not a lot to recommend. Of the 12 tracks and 28 minutes of playtime, I probably enjoyed the flighty Carcass-like hulking of "The Abyss of Nightmares" and "Eating the Christians", and "Hunter of Flesh" also has some decent old school death rhythm guitar, though it gets a little choppy. The band has also covered "Obnoxious (Surgeon of the Dead)" from the 2002 album Morgue Sweet Home of Spanish goregrinders Haemorrhage, which fits in with the original material.

If you consume all things carnal and grisly, without much regard for standout songwriting or any intrinsic quality aside from guttural groping and moshing brutality, then Suppuration is far from the worst you've heard. The production here is not bad, lo-fi but bright with butchery. I simply cannot recommend the album, as there are hundreds if not thousands of similar and superior efforts with more memorable songwriting. I'd advise checking out Ancient Necropsy first, some of Martinez' stronger work.

Highlights: The Abyss of Nightmares, Hunter of Flesh