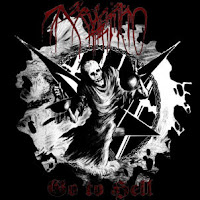 After nearly two decades of low-key demo releases, Sweden's Maleficio have released two full-length albums in as many years. Go To Hell is the second of these, and it shows the band at their most beastly and effective. To describe their sound is to simply extract the aggression of earlier In Flames or Dark Tranquillity albums, strip out much of the melodic excess, and then make the riffs faster and more angry. A little bit of a folk metal edge bleeds into the compositions, mainly through the patterns of notes, and in this regard the band reminds me of Amon Amarth (though savage and rough about the edges). The band is honestly heavy enough here to possibly have an appeal for fans of melodic Swedish black metal (Sacramentum, Dissection, perhaps even Dark Funeral).

The band is at their best when performing fast and intense material, ala "Malediction Lecture" or "Fortress by the Crystal Line", but Go to Hell covers a pretty wide range of tempos, like the glinting acoustic intro of "In the Name of the Holy" which evolves into a gothic/ melodic death metal hybrid with some clean vocals. "I'll Piss On Your Corpse" is a slower track with driving grooves and a catchy melodic riff in the verse. "Burn" has some dark grooves to its opening melody, and a decent, shrill lead.

I was undecided on the tone of the album. The guitars are pretty raw, with a lot of crunch to them though they sit just right in the mix. The drums are likewise audible, though sometimes tinny below the power of the guitars. The vocals are given a full growl, aside from a few points where they go clean. As a whole, the production does make the band stand out from their bigger budget countrymen who often polish away any sense of heaviness from their sounds. Maleficio is like the caveman ancestor to much of melodic death. They use the same basic writing but just decide to go primal and aggressive rather than refined. There are enough catchy rhythms here for the fan of 90s melodic Swedish death/black metal, even if the album is no masterpiece.

Highlights: I'll Piss On Your Corpse, Malediction Lecture, Fortress by the Crystal Line