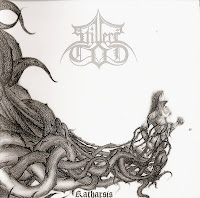 Katharsis is another of those ambitious demos you hear which is really just an album in disguise. At 49+ minutes of quality black metal, with a pagan/folk edge to it, this release could easily be snapped up by some label, released as a full length and no one would know the difference (except the band). But alas, this is the form it is released in, and the criteria to which it adheres.

Stillers Tod is a German band with a pretty straight and dark tone, which they spice up just enough with acoustic sections, creepy vocals and glorious melodic infusions to pass inspection. Kargáist is the vocalist and also writes the music, then rounded out with a full band. Katharsis features 10 tracks, with a good variety of slower and faster material and a pretty decent mix. The vocals are thick, accented and decrepit, without much of a rasp to them, and this matches up well against the thundering guitar rhythms.

"16 Jahre Fegefeuer" is an average bombastic, epic synth intro which you might find at the beginning of a great many folk/pagan metal records, and "Katharsis" opens with a few acoustics, before thundering off into the night with blazing guitars. There is a nice break with some violin and synthesized choir, before the battle is rejoined. "Von Wiederkehr und Niedergang" has some nice, night-life samples before a rather epic, arching march that softens beneath the cleaner vocals of Kargáist, who is actually pretty good at these too. "Blutiger Schnee" has a streaming melody over a pulverizing rhythm, which reminded me of Endstille (though that band does not break into the similar glory charges this one runs up here). I really enjoyed the track 5+ minute "Seelenwanderung", which is all synths and bells and whispers. "In jeder gottverdammten Nacht" has a driving, descending rhythm that makes for an epic warlike atmosphere. And "Demian" is a worthy closer with a great, epic build up and some fine synth-driven parts.

Katharsis is a pretty high quality introduction at the demo level, and Stillers Tod should fit right in with the better half of the German black metal scene. They don't often go as savage as an Endstille, Dark Fortress, or Lunar Aurora, but fans of those bands would find something here to enjoy.