Amorphis - Tales from the Thousand Lakes (1994) 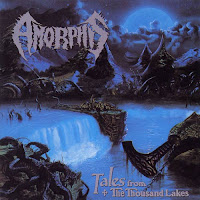 Though their recent offerings have slacked off in the progression department, content with simply cannibalizing the range of their previous works, there was a time in which every step Amorphis made was extremely fresh. From the primitive death/doom of their debut Karelian Isthmus to their glazed hippie folk rock on Am Universum, they continued to bring something new to the table. After that, well, they struck a plateau, acquired a new vocalist, and now continue to rehash (and to be fair, refine) a few of their earlier ideas. Tales from the Thousand Lakes is not my favorite Amorphis record, I would have to bestow that honor upon the successor Elegy, for it's wild and imaginative mesh of 70s prog, folk rock and eternally memorable melodic death metal. But this album is where the levee broke. The band's name was no longer a whisper on the tongues of a few underground death heads, but a roar throughout Europe and beyond.

The real draw here is the increased atmosphere that the band initiatied through the acquisition of Kasper Martenson, whose Moog and pianos fit fluidly with the bands gruff, bottom feeding atrocities. But he was not the only marked difference from the band's debut; the addition of folk-like, wandering melodies into the guitar elevated the entire experience, and many bands in the future would adopt a similar style and tone. This album would be the last before Pasi Koskinen joined the band, so the growls here are handled by guitarist Tomi Koivusaari, with some Ville Tuomi of Kyyria contributing some cleans. Add the band's lyrical themes, derived from the Kalevala (Finnish folklore collection), and the result of these shifts in direction were nothing less than spectacular. Tales from the Thousand Lakes still sounds amazing, 15 years later.

The "Thousand Lakes" itself is an excellent intro piece, Martenson combining a string of resonant piano strikes with some subtler notation, lush female choir synthesizers and electronic noise like running water begins to fill it out until it swells to a climax 2 minutes later, to inaugurate "Into Hiding", which arrives in sodden, melodic despair. The low end retains the death/doom mantras that dominated their previous album, but the folk feel to the melodies makes the track instantly recognizable, a hybrid of arabesque and Scandinavian composition. "The Castaway" opens with some of the best guitars on the album, immediate and glorious, to which the elfin ghosts of the cold forest traipse about uncontrollably. It was a year when thrash metal had all but closed the grazing grounds, and death metal felt soon to follow, and here comes Amorphis to help open the floodgates and re-invigorate the ailing metal scene. "First Doom" slowly churns itself into a gorgeous, glistening doom melody reminiscent of Paradise Lost's first two albums, one of the darker and more pensive tracks on the album. And following this, the album's most timeless track, "Black Winter Day", which got it's own EP release (most copies of this CD will have the EP material attached). A cycling, crushing track with excellent melodies provided through both the guitar and keyboard, against a swelling backdrop, and Tuomi making his best contribution to the record through his cutting clean vocals.

"Drowned Maid" picks up the pace for a winding, churning foray into submerged terror, dense overarching melodies compete for your affection below the weight of Koivusaari's grunt, and then at about :55 they bust out that INCREDIBLE riff. Drowning never felt this lovely. "In the Beginning" has a great interplay between the growling and Tuomi, and some bustling synth work during the bridge that would foreshadow some of the better moments of the followup album. "Forgotten Sunrise" is an almost blues-like, elegaic exploration, with swaggering melodies accompanied by the Moog, and some pure, flowing old school death metal expression. "To Father's Cabin" has a dash of Metallica-inspired, slow thrashing before it turns into a curious jam. There is quality to be had here, but it's my least favorite on the record (probably the one reason this album is not a 10/10). "Magic and Mayhem" more than compensates with its blissful descent, the acoustics and organs burdened in sorrow and grace, then transforming into a groovy metal breakdown with some proggy synthesizer strikes.

The production standards here were immense for the day. It was by far one of the best death metal sounds to arrive in the 90s, and it HAD to be, because of the added layers of synth to the core composure, and the separate vocal styles. I would not change a damn thing here, it seems as impressive to me in 2009 as it ever did before, and I can still lose myself deep inside the tones. The lyrical matter is fantastic, the band's dedication to their own heritage never feeling cheap, and rather than just write gallivantin' melodies they most often explore the darker side to the fables, which is more suitable to their music. This is the last truly 'dark' Amorphis album, in fact, as Elegy would be a lot more enthusiastic (though not lacking in the metal department). Though a major progression over the previous album, this is hardly an 'experimental' album, the clarity of vision is evident as the one direction this band could travel in. And it gave them great, deserved success. That you can now pick this up with the added tracks of the Black Winter Day EP is a given. Tales from the Thousand Lakes is an essential metal album, for more than nostalgic reasons, with only one track lagging behind the rest.

Lowlights: realizing that no matter how inspired I ever might become, I could never produce something like this, even through divine intervention.