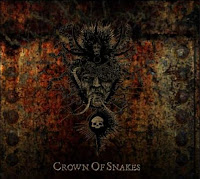 Though a storied project (with 13 years of demos and split releases), Crown of Snakes marks the first actual full-length from the German Darkmoon Warrior. As I am a fan of one of A. Krieg's other bands, Eternity, I was eager to get my hands on this, and I cannot say I'm disappointed. The style of Darkmoon Warrior is a lot more dense and atmospheric than Eternity, though the trade-off is that the material here is less mocking and evil. The tone of the album truly captures the late 90s feeling of black metal, with what seems like endless, laid back blasting in some areas, and breaks in others that usually lead to some of the most interesting moments.

"Hunter of the Sun" begins with some sorrowful black melodies, occasionally breaking for some slower, lurching segments, and ultimately breaking down into a melodic black doom rhythm below the guitar solo. "On the Wings of the Ancient" keeps a slower blasted pace through almost all of its playtime, the transitions delivered through the weaving of the guitars. At this point the tracks become longer. "Crown of Snakes" is 8 minutes long, and I really couldn't get into it until the final 3 minutes, where it became more pensive and atmospheric, when the cool dual vocals hit. "Soul Tomb" is beyond 8 minutes of descending black melancholy, one of the album's more emotional offerings, but "Toi Hekunra" picks the pace back up with some charging blast beats and spiraling melodies. "Gräber" is another blaster that breaks for some pretty excellent melodic doom sections, and the epic-length "Condition Black" closes off the album with over 12 minutes of more experimental black metal, with interesting tempos and riff structures.

Though the quality of individual riffs on the album varies, the sum is greater than its parts, due to the very atmospheric pulse of the music. The mix is sodden and depressive, yet professional rather than grim or raw. A. Krieg has more of a death metal growl here than a black rasp, creating an added gloom. This is certainly not Eternity 2.0, so don't expect much savagery; nor does it resemble his other bands Hellfucked or Anti. Certain moments on the album truly glow with quality, and the connecting tissue between these is immersive enough that it's a sit-through type of album, when you've got 52 minutes to kill...yourself.