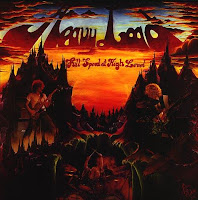 While it's sad that more people likely know of Sweden's Heavy Load through the HammerFall cover of "Running With the Devil" than through any quality time spent with the actual originals, I feel like the time is right for a renaissance of interest in bands like this, who were active by the time the dust alighted on the 70s and deserved quite a lot more attention than was ever granted them. Nostalgia is in full bloom of late, with countless bands attempting to mimic ever more obscure forebears, so why half ass it? Let's skip the 80s and head straight to the roots with this 1978 debut Full Speed at High Level, and album that might have knocked elbows with oldies like Stained Class or Never Say Die! had the winds of fate favored their choice in the treacherously obscure (self-issued) Heavy Sound imprint and given them a single worth its salt.

After all, we're talking about what is arguably the first Swedish heavy metal album, not an insignificant career footnote when one takes into consideration the massive wealth of bands that have exploded from that country, dominating numerous sub-genres in ensuing decades of accelerated extremity. Siblings Ragne and Styrbjörn Wahlquist formed the band in '76 and clearly drew upon the popular sounds of the day, so it's not surprising that the writing often hovers on the margin between the hard rock sounds of KISS, Led Zeppelin or the Scorpions, but there's also a heavier edge redolent of Black Sabbath, Deep Purple and Judas Priest to the point that Full Speed at High Level might be seen by some as somewhat of an also-ran, if not for the general novelty of the sound and the distinct timbre of Ragne's vocals; the latter of which ironically provides a crippling detriment to this album's potential success, if not an absolute obstacle to its appreciation.

The riffs on the record tend towards memorable rocking, in particular the driving Priest-like "Full Speed at High Level" or the punctuated grooves of "In Two Minds" or "Midnight Crawler", and as early as this debut they were pulling off spicy dual melodies and psychedelic atmosphere worthy of darker 60s or 70s prog rock influences. The third member of this power trio, and their second bassist, Dan Molén would appear only on this record, but he's got a plunky tone to his lines that creates an almost danceable mood to the more serious strain of the guitar licks. But probably my favorite performance here is by drummer Styrbjörn who proves himself a dynamic and skilled rhythm keeper with a sense for dramatic fills and grooves. Heavy Load was unquestionably ambitious here. From the "Barracuda" goes surf rock inauguration of "Moonlight Spell" to the synthesized proto prog-metal epic "Caroline", to the 11 and a half minute leviathan "Storm" which might best be categorized as a Swedish "War Pigs" with its Iommi phrasings, no two songs sound quite alike and that plays to the record's infinite refreshment.

Unfortunately, the vocal performance on the album all but ruins it for me. Strained, unsettling and very often slovenly, Ragne doesn't seem to have the range or the talent for structuring individual lines to really sell the hooks here. I'd compare him to a lower range Osbourne or Rob Halford dowsed in a minute reduction of Robert Plant's whine, with an undeniably dark edge to his style that would later transform into a more potent and polished tone. While I can forgive the guy's obvious accent to a degree (often I find such a thing an advantage), the delivery through numbers like "In Two Minds", "Rock 'n' Roll Freak" or even the title track opener feels forced, frivolous and all over the board. Not to the extent that it entirely destroys the atmosphere of the album, because there's some thriving, theatrical charisma about Ragne despite his faults, but enough that I've just never been able to enjoy it as much as their later full-lengths.

I should also note that Full Speed at High Level features one of the premiere 'Viking metal' tunes of the 70s. Perhaps a pale shadow of Led Zeppelin's titanic "Immigrant Song", but certainly worthy of Canadian Thor and well ahead of Germans Faithful Breath who would adopt that whole image around the dawn of the 80s. "Son of the Northern Light" is far one of the heaviest and most memorable pieces here, not only for the feel good grooves in the faster paced riffing (at least on this album), but the explicit Christian stomping Nordic worship. Pretty intense for its day, when Quorthon was just hitting puberty and Venom had yet to punch their tickets to Eternal Damnation. Alongside "Full Speed..." and "Midnight Crawler" this is one of the tracks I've always found myself returning to, even if the 1982 sophomore Death or Glory takes precedence whenever I feel the need to scratch this particular, archaic itch.

In summation, Heavy Load's debut is a decent piece tempered by variation and personality, but the limited distribution and the flimsy vocals just weren't doing the music any favors. We're not talking "Exciter" or "Saints in Hell" here, but it flows well enough through its colorful cover art and compositional contrasts to appease anyone with an interest in such formative sounds. Fans of harder 70s music with clear psychedelic and bluesy overtones would do well to at least check this out, though the later efforts are admittedly more robust and distinct.
Verdict: Win [7/10] (I hope you feel engaged)