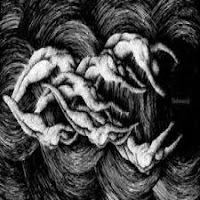 Generally, I'm one of the first people to scoff at the trends prevalent in metal music, and I don't think anyone could deny that we've been inundated with scores if not hundreds of bands channeling forth the cavernous and crushing contemplations that bands like Autopsy, Incantation, Asphyx and Immolation once wrought upon the deaf ears of a largely unappreciative metal audience in the earlier 90s. Sure, I've enjoyed and lauded a goodly number of these younger acts, but when will the flood cease? However, there's also a flip side to this tenebrous tenor, in that there will be artists which emerge from such squamous horde aesthetics and evolve a sound with such a consistent, fluid depth that all those beholden to the metamorphosis are enriched by extension.

For myself, Seattle's Anhedonist is proving to be one such mutant, their full length debut Netherwards a mournful monolith of subterranean strength, invoking the death/doom drudgery of its influences and then fashioning it into an irresistible, atmospheric emission that will have fans of Disma, Sonne Adam, Funebrarum and other contemporary titans of the form clutching their private bits in wanton cognizance. At four tracks and 40 minutes, I was mildly apprehensive that the compositions would come off swollen, endlessly repetitive and numbing, a trait that many bands of this niche seem to mistake for artistic merit, but Anhedonist do an extremely good job of creating an air of momentum and progression through each of the more substantial (i.e. 9-15 minutes) pieces. Sure, the emotional direction of the music is down, down, DOWN, yet surprises await in the album's murky environment that create a real payoff for the descent.

The tremulous tone of the guitar is so dense it feels like having a caul of soil and muck wrapped around your ears and face, and where the low muted grooves and squeals bludgeon along to the cadence of the drummer, as in the slower 'verse' sequence of "Saturnine", you get an impression of titans surging restlessly through the bowels of the earth. Tempos are varied much alike their forebears Incantation, so the album will shift from faster, bottom grinding sequences of mud caked intensity to slower, death/doom passages where solemn melodies will alight upon the thick undertow like funereal mantras. Even spookier are the cleaner guitar sequences, like the haunted intro to "Inherent Opprobrium" or the closing seconds of "Saturnine" where unnerving ambiance and distant bells roll in to welcome the dust of its end.

Granted, the bass is never quite a factor beyond its atmospheric ability to creep along as an anchor to the rhythm guitar, but the drums provide just enough fills to provide a warlike, tribal sediment; and vocalist V.B. binds it all in place with a charismatic guttural redolent of Chris Reifert's formative timbre circa Severed Survival or Mental Funeral. All told, the production to Netherwards is massive, like a gaping chasm beneath the listener's feet from which nightmares boil, and the breadth and variation to the songwriting provides for one of the better efforts of this niche in recent memory. At no point did I feel like the music was some dialed-in approximation lurking in the shadows of its influences, but a fresh, Faustian effluvium that sold its soul to the past in order to crush the life out of the present; morbidly improving upon their 2010 demo The Drear. A great record. Suffer it well.