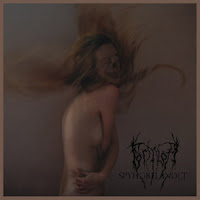 With the loss of several Scandinavian bands like Lifelover and the similar Apati this past year due to the deaths of some important members, I've been inadvertently robbed of a significant chunk of my sky darkening fix of depressive, outsider black metal rootstock. Well, as Formloff prove with their sophomore Spyhorelandet, the fix is back in, thanks to an unusual take on the style which takes on a corresponding level of angst without directly aping any one sound. If I were to compare this album to anyone in particular, it would likely be Sweden's Shining, due to the downcast resilience of the riffing structures and the fact that the primary vocals sound like a mix of Kvarforth and Darkthrone's Nocturnal Culto, yet this Norwegian duo writes with an uncanny distinction all its own.

Swaying, grooving guitars drift across dissonant and eerie note progressions as the bass thumps forth a morbid substrate and the drums generally hammer along an axis of standard rock beats. However, the band is not afraid to incorporate softer, cleaner sequences of regretful guitars or accelerate into a blast beat wherever their emotional stream of consciousness takes them, and as a result the album feels like a schizoid rainbow of extremes, a pendulum between the precepts of tranquility and vein-opening desperation. Perhaps the most fascinating aspect of the band's compositions was the inventiveness of the chords, for instance the jangling melodic caul choking the more forceful passages of "Harde Ord På Kammerset", or the creepy, minimalist crawl that perforates "Skævven"; but I also loved the mild inclusion of elements like an organ or saxophone which hint at a larger lexicon of experimentation, even though the band tends never to dive entirely into the deep end of possibility.

Production here is clean and wistful, with an organic tone to the guitars that perfectly matches the border between the indie/progressive rock influences and the harder, traditional sounds. There is always something surreal and creative awaiting around nearly every curve in the album's path, and this is usually manifest through the string-work. Melodies will pop and spike up unexpectedly and create this shifting added dimension to the central rhythms which really catches the ear. The vocals are abrasive and gut-felt, perhaps nothing too intense or unique, yet dynamically refreshing alongside the foundation of the beats and guitars, and I really enjoyed where they would layer them for an added texture of torment. Ultimately, Spyhorelandet is beyond merely intriguing, but a free-flowing stream of agony and amusement that truly bridges its disparate influences into a urtical union. Highly recommended for fans of the aforementioned Shining, LIK, Virus/Ved Buens Ende or the more straightforward but similarly evocative Norse collaboration Sarke.