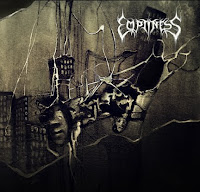 Having discovered Belgians Emptiness through their superb 2007 sophomore Oblivion, I had build up rather massive expectations for the inevitable follow-up, which I'm afraid haven't exactly been met with Error. Not to write this off as a negative step or a bad album by any means, but here they've gone for a more chaotic, atmospheric tone that falls somewhat short of the riffing explosions characteristic of Oblivion, and I'm not sure the trade pays off. Granted, both of the band's earlier works were quite distinct and atmospheric efforts in of themselves, but the guitar progressions felt more expressive and structured where here they form simpler patterns beneath the low pitch of the vocals, with perhaps a sheen of black influence circa the recent Enthroned (which Phorgath and Nerath Daemon also play in).

Tracks like "Worst" and "Error" are loaded with these simplistic tremolo lines whose intention is to hypnotize the listener while the tectonic gutturals belch forth alongside the thundering drum belligerence of drummer Twan. Very often, the tracks will lurch into these shifting, dissonant grooves that feel seismic in origin but rarely catch the ear for long, or they'll drift into spacier ambient/distorted guitar sequences where the percussion will subside, or the occasional blasted burst. The leads are frenzied and often trippy (once again, I'd refer you to the title track "Error") but rarely very memorable, and though the band are playing in perfect lock step, there seems something so loose and messy about the songs that it seems underwhelming after the sheer magnificence of the last album. That said, there are some points here where it all really gels together to create this warm, cavernous post-metal cacophony with strains of textured chords that write about the mind, usually deeper on the record like "Low" or the closer "No Earth".

Particular threads are certainly consistent with Oblivion, like the minimalistic approach to song titles, the deeper vocals and a number of the guitar sequences, but I feel they were definitely attempting something more tangibly ominous and raw. Strangely, Error is perhaps the most consistent of the band's records in terms of its internal variation. It plays out like a single, menacing symphony from some subterranean space, and it's nearly as oppressive, jarring and unnerving as something from Australians Portal, or perhaps a death metal Neurosis. Alas, this time out the songs simply are not of the caliber that I wished to experience repeatedly; but those who are heavily enamored of the voluminous, chasmal death metal redolent of early Autopsy, Incantation or Immolation, and would be interested in an admittedly different take on the aesthetic, would certainly do well to give these sepulchral emissions at least a once over. For if anything, Emptiness retains a unique quality to it that you won't hear every day.
Verdict: Win [7/10]
http://www.emptiness.be/

Posted by autothrall at 9:33 AM