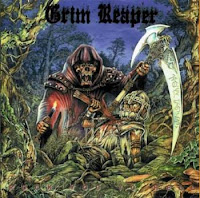 While I slightly favor Fear No Evil on a track for track basis, Grim Reaper's third album Rock You to Hell is probably the one I've gotten the most mileage out of. It's the sort of cheesy, reliable 80s metal that remains timeless despite any of its shortcomings, and I've been listening to it ever since a friend stole the cassette from a local department store by hiding it in his shoe and later traded it to me, presumably for something far better (or at least heavier). The details are a bit hazy, but then I'm nearing that midlife crisis age where I'm likely to forget far more important minutia. At any rate, Rock You to Hell is a better looking album than either of its predecessors, though certainly no more serious with its cartoon-like reaper and prostrate warrior mummy to whom something doubtlessly unfortunate is about to happen.

The production here is another step forward for the band in that you could run this up against any of the more mainstream hard rock/metal hybrids of its day like Quiet Riot or W.A.S.P. or whatnot and come up favorably, and it's that very margin of aesthetics that dominates a lot of the songwriting. Tracks like "Lust for Freedom" and the bluesy, swaggering and silly "Suck It and See" would've sat quite humbly on the popular hair rock radio of the period, but then a lot of tracks like "Rock You to Hell" and "When Heaven Comes Day" have more of a palpable early power metal intensity to them not unlike Fifth Angel or the Dio solo albums. The composition was characterized by predictable choruses, hooky and energetic guitars dowsed in structured leads and melodies that felt refined even beyond Fear No Evil, but I wouldn't say that the songs were necessarily 'better', just more of the same in a natural cycle of evolution that wouldn't even be shaken many years later when front man Steve Grimmett would appear in his infamous GARMIN GPS commercial.

Personally, I'd rank that man's individual performance through these tracks as the best of the band's albums to date, in that there's really no place you'd want to strangle him for seeming too awkward and shaky (like their first album). He implements a good balance of his mid-range and screaming and tends to vary up the individual lines enough that you can tell right off that he put a lot more work into them. But then, the tremendously trite lyrics are the sort that any teen could scribble into his notebook while dreams of KISS, Alice Cooper and sugarplums were dancing about his or her head, and in some cases like "Suck It And See" they are just downright embarrassing. Part of me likes to think of it as a soundtrack to some vampiric fantasy like the Once Bitten film with Jim Carrey, but the lyrics are, as usual quite bland, and just hearing Grimmett belt out the chorus causes fits of unintended laughter every time, without fail. Not that others like "Rock Me 'Till I Die" or "You'll Wish That You Were Never Born" are anything to write home about.

In the end, the fact that this was released through RCA, with a decent video rotation for the title track (one of the best on the album) via MTV's Headbanger's Ball, and still didn't cause much of a stir among the metal public who were justifiably more obsessed with Metallica and others of that caliber was a portent of this band's demise (compounded by the label dispute they later had to endure). Sure, there was and will always be a niche crowd for this stuff, and it's made a bit of a comeback since, but there was just nothing exemplary or awe inspiring here. Then again, if leopard print tank tops, bad mullets and big, balls out obvious choruses are your thing, then have fucking at this. It might not be revolutionary, but I enjoyed it more than albums like Ram It Down or the Quiet Riot s/t, and it surprisingly doesn't sound any more dated or passe than the day I first heard it. Fun, relatively consistent in quality, and harmless. I remain partial to Fear No Evil, but only by a slim margin.