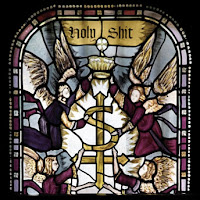 This is not my first encounter with Superchrist, a long standing US party metal outfit who have been touring and releasing albums since the late 90s, once through a local imprint here in the Boston area. They've got a simplistic formula to their heavy metal which draws upon influences heavily from hard rock and metallic punk, especially the 'dirtier' side of NWOBHM like Motörhead, Warfare, Saxon and Tank. But don't let the admittedly lighthearted nature of the band fool you into thinking they're mere lazy derivatives, because the Chicago mobsters have great tone and classic songwriting skills that should continue to please their installed fan base and perhaps even win over the new, young audience into such throwback sounds as those conjured by bands like Midnight, Speedwolf or Abigail.

Granted, Superchrist eschew the blackened, wilder vocals for something more along the lines of an Algy Ward or Lemmy Kilminster. Dirty and full-figured but quite clear, and it's a good fit for the dense, ruddy cheeked tone of the guitar. Drums shift between a standard hard rock clip as on the opener "Take Me to the Graveyard" to something decidedly more angry and punk like "Get Lost" or "Run to the Night", and the same could be said for the actual composition. As you'd expect, complexity is not a part of this band's vocabulary, the songs are written with at most 2-3 riffs in mind, bluesy and brief flights of lead work and a lot of genuine energy that transfers directly to their stage performances. In this regard, Holy Shit is not a whole lot different than Defenders of the Filth or any of their past full-lengths, though I think I preferred the production here for its fluid abuse, and the songs, while a bit restrained, seem substantially stronger in their ability to teleport the listener back to the formative, simpler times that inspired them.

To be blunt: Superchrist is way retro, but they've been doing it far longer than most of today's upstarts, and there's a certain confidence and experience that comes with the delivery of this album, not to mention the writing. It would be almost impossible for a band writing in this niche to NOT come off to some degree derivative of the many classic metal, hard rock and punk acts that predated them, and Holy Shit is no exception. But like the similar Midwest throwback artist Midnight, they bring this tangible viridity to the music that comes across entirely genuine, and as the band want nothing more than to have a good time, sharing some music and beers with the audience, I'd say this is working very much as intended, especially on the groovier tunes like "Burn Again" with its old school Metallica spin or "PAMF" which might have just as well been written for Orgasmatron. It might not be anything remarkable, but it doesn't need to be. Rock on, Windy City soldiers.
Verdict: Win [7.25/10]