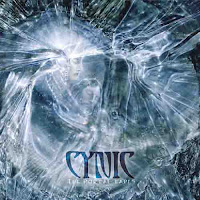 I'm not exactly sure why Sean Reinert and Paul Masvidal thought it appropriate to release this material under the Cynic brand. Perhaps to dry up any potential confusion with the dissonant Australian death metal band Portal, or perhaps because in retrospect they've decided this should be incorporated to the lineage of their primary project. To be fair, though, The Portal Tapes, a re-issue of the extensive demo (album length) they produced in 1995 with singer and keyboardist Aruna Abrams does showcase the evolutionary shift between their debut Focus and its 15-year younger successor Traced in Air. But a warning to the potential purchaser: if you're expecting the synthetic complexity and arrangements of the debut, rooted in the jazzy death and thrash metal niche they, Atheist and Hellwitch were molding into the Florida scene, then it's possible you will be highly disappointed.

Portal was essentially a lighter, more ethereal abstraction of the Focus sound, with almost all its metal components eliminated aside from a few heavier chords and leads. Aruna Abrams brought a new dimension with her often haunting, but generally well rounded inflection that wouldn't be out of character for someone like Sarah McLaughlin, though Abrams doesn't have quite the same range. A bit of a dreamy lounge lizard aesthetic as she coordinates with Paul Masdival's dirtier, drearier tone, but then it's this balance of relaxation and subtle technicality happening in the composition that really makes Portal's sound enjoyable. Chris Kringel's flowing, memorable bass lines here are certainly redolent of Sean Malone from the better known Cynic, but the guitars were recorded in a generally clean tone that was so prominent in 80s prog rock, sliced through by meticulous leads that forsook self-indulgence in favor of the songwriting.

I remember there being a fairly sour reaction to this material since it drove the duo away from the heavier fusion featured on Focus, and as we all know the narrow swath of tolerance found in many pundits of underground extremity is unlike to be overcome when a favored artist's sound evolves so dramatically, but they were wise originally to advertise this as a separate band: a practice that they've now eschewed since this material makes a lot more sense in the context of Traced in Air or the more recent Carbon-Based Anatomy EP. Of the 10 songs here, I'd say that at least a half dozen were catchy, whether being heavily driven by Abrams or more of a joint effort with the male-female interchange. An atmospheric accord of guitars, bass and light but dynamic percussion that is certainly comparable to the more accessible sequences they've fit into their post-reunion writing, and songs like "Karma's Plight", "Mirror Child" and "Belong" have a lush airiness to them which might certainly appeal to a cross section of jazz/pop addicts or prog Gothic rock of the less intense variety.

But, as they say, 'it is what it is'. If you harbor an innate opposition to Cynic's material post Focus, then there's not much reason to pursue The Portal Tapes. It's not metal. If, on the other hand, you're a follower of the same existential prog rock, jazz and ambient influences that the band explored in their side projects or on the recent Cynic, then this might prove a 45 minute treat for your senses. It's a little adrift, a little hippy. Numerous of songs feature structures that are a fraction too similar, consistent but not all equally memorable. In sum I'd grade it as a pleasurable listen. Didn't love it, but I did like it, and it's not at all deserving of the unfathomable ire it once provoked from those desperately seeking Focus 2.0. And finally having it all in one 'official' place (a few of the tracks were included on the 2004 Roadrunner reissue of Focus) is not a bad thing.