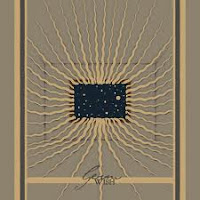 Germ is an interesting case where an artist puts an eclectic spin on his already established sound, but rather than continue beneath the moniker of a previous project and potentially alienate the audience, decides to transform this into an entirely new entity. Many who have followed the Australian black metal rogues' gallery will probably be familiar with multi instrumentalist Tim Yatras, who has an enormous repertoire in both that and the local power metal scene, having performed and sessioned with bands as diverse as Austere, Lord, Pestilential Shadows, Ilium and Dungeon, to name but a few. Germ is more or less his latest lovechild, an act that takes the depressive, melodic strains of Austere into a futurist format of electronica, choirs and cosmic atmospheres that darker outfit hadn't previously explored.

The result, Wish is a refreshing, nuanced, and mildly flawed hybrid of black/rock aesthetics that might seem like a merger of Austere's tortured, warm tones and fellow Australian Midnight Odyssey, who have also evolved into a similar, modernist space with their sophomore album. Yatras utilizes both his vile, soul scathing post-Burzum rasp and a cleaner pop tone in his vocals that work well off one another, not to mention the spacious choirs that hint at a love for classical, operatic arrangements. Wish tends to alternate between bulkier metal-injected compositions like "An Overdose of Cosmic Galaxy" and "Breathe in the Sulphur/A Light Meteor Shower" with shorter electro vignettes like "Oxygen", "Gravity" and "Infinity". I rather admired the latter, which often recalled the Vangelis soundtrack to Blade Runner, a touch of Tangerine Dream or perhaps even the sci-fi pulse you'd expect out of the scores to Mass Effect or Tron: Legacy. However, I often felt that the synthesizer lines felt arbitrary when paired with the heaviness.

The best example of this would be the 10 and a half minute opener, "An Overdose of Cosmic Galaxy", which I'd consider possibly the least catchy track here and probably not the best choice to lead off. Here, the electronics are poised subtly over the simplistic chord patterns but feel somewhat extraneous in execution. Unnecessary. While predictable, the rhythm patterns provide a rather shimmering basis for the Gothic, cleaner lines plucked atop them, but I felt like this was enough. This is also true of "Asteroid of Sorrow", a shorter piece at least, but the tinny little synth lines did it a disservice. Fortunately, in a few of the other cuts like the epic "Breathe in the Sulphur" with its double bass undercurrent and soaring choirs, or "Your Smile Mirrors the Sun", which is closest in structure to a traditional black metal track, the techno bits seem a little less noticeable, but I don't feel like that dimension of the project was realized to its full potential beyond the aforementioned intermission segments.

Still, Germ is a curious concept, an expansive exploration with near limitless directions that it could be taken off in, and to Yatras' credit, he keeps it quite cohesive and almost restrained. This is not some Gothic/industrial freak show, but an eloquent and emotionally capable journey that could payoff for those willing to immerse themselves in its drifting decor. The production is in general very well managed, with the vocals clear and effective and the uplifting choir sequences exploding into the thematic firmament, and as usual the guy's a very capable drummer. Most of the rhythm riffs are insanely predictable, but the few leads strewn about have a nice, galactic finish to them that fits well to the concepts of the lyrics. It's worth hearing, especially if you've an interest in that rare post-metal which is not gun shy of keys and symphonic ingredients.