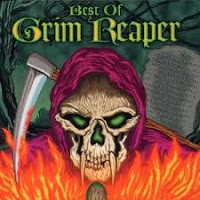 Grim Reaper was yet another victim of the shifting landscape of heavy metal in the late 80s, not to mention the bullshit label dispute that helped steer them into an early grave. Perhaps one of the most accessible NWOBHM acts not to shift into hard rock territory and reap millions (aka Def Leppard or various Judas Priest records), they had a knack for clean if predictable songwriting, decent leads, a charismatic vocalist in Steve Grimmett and and big choruses which you remember long after you hear them on a record. Admittedly, there was a bit of a 'big dumb fun' factor to the songwriting, and I still find myself laughing today at numerous of their tunes and videos, but but also banging my head along, the phantom mullet of my teenage mullet whipping about upon its airy, nonexistent threads. So in their case, I'd say the rather lighthearted effort and energy expended in their music paid off.

Unfortunately, it just didn't pay off for the band itself beyond the development of a loyal cult following. They had decent visibility, some video rotation and buzz in magazines but were unable to match the success of many of their countrymen. Nevertheless, after 12 years of absence after the Rock You to Hell album, I was pretty surprised, maybe even psyched to see something new come out in the store. Until, of course, I realized that it was the tits-on-a-bull uselessness of a generic studio compilation, all tracks derived from the band's previous studio full-lengths, remastered to create consistency in between the constituent albums, but otherwise not a whit different or improved than on their original releases. I guess if you'd never heard the band, had no means of getting the three studio albums in the later 90s and were one of about 12 people worldwide interested in this sound in 1999, then this might have been a reasonable return for your investment. It's got 17 of the 25 album tracks present.

Ultimately, though, it's utterly fucking worthless, and the individual albums deserved your cash and attention far more than this penny pinching rehash. Frustrating incompleteness, close but no goddamn cigar, RCA Records. I mean, if you were going to go as far as 70 minutes and MOST of the band's songs, why not make it a double disc anthology and really worth the veteran fan's time to get the CDs, in addition to any 'first timers'? A new cover and some liner notes just don't cut it. I realize that Grim Reaper didn't have a lot of 'rarities' or B-sides available to include as bonus content, aside from their first few demos. The singles were just songs ripped from the albums to tapes or 7" records. But this is like someone selling you an Empire Strikes Back DVD with a few cool scenes missing.

As for the material selected here, you basically are getting ALL of See You in Hell minus "Liar", six of the nine cuts from Fear No Evil (excluding "Lord of Darkness", "Matter of Time" and "Rock and Roll Tonight") and four from Rock You to Hell ("Lust for Freedom", "Suck It and See", "Waysted Love" and of course the title track). Skewed a little towards the bands' earlier work, but not a bad selection as far as the big hooks and vocal lines. But as someone who bought the original tapes, it just feels like I'm being sold my own rump fat back as soap, and thus I can think of no reason whatsoever to own it when it might be better smelted down to create new plastic dinnerware for the hungry. What's more, you can actually purchase the whole discog now buy picking up the See You In Hell/Fear No Evil double album through BMG, and then Rock You In Hell on its own. Won't put you out much more than this, so don't waste a nickel on this thing. Not even the cover is worthwhile if you compare it to any of the actual albums.