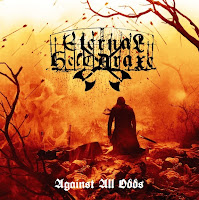 Against All Odds is certainly competent enough as an execution of higher production standards within the pagan black metal niche, and it successfully contrasts its melodic overtones with a raging central fervor, but I couldn't help but feel that this had already been done with far more depth in the past. Not that Eternal Helcaraxe have the intention of heavily expanding upon the parameters that pioneers like Bathory, Enslaved and Immortal brought to light in the late 80s and 90s, but the Irishmen occasionally shoot themselves in the feet with rather predictable chord sequences and familiar melodic tremolo picking that doesn't exactly brand itself upon the memory.

That said, this is a well arranged debut with a number of considerable strengths to it that would be impossible to deny. I greatly appreciated the band's ability to arrange and pace out their dynamics so there is always something refreshing around the corner. The opening string, piano and hovering synthesizer piece "Claim Your Place With the Gods" is the sort that instantly calls forth emotion in the listener, gradually escalating with pangs of sorrowful beauty. They honestly orchestrate their acoustic segments quite well, especially the extended break in the titular track "Against All Odds (All the Battles to Come - Part II)" which saves the 11 minute finale from lapsing into monotony; or the similar intro to "Invictus". Synthesizers are placed liberally about the mix wherever they can drizzle an added sheen of glory or melancholy, and the guitars and rasped vocals are placed right front over the warlike performance of percussionist Tyrith.

A lot of the primary riffs are the usual mix of 90s influenced blast beats and the slower, mug swinging sorts of progressions like the verse of "Invictus", and I'm reminded of later period Immortal (Sons of Northern Darkness) if it were crossbred with bands like Moonsorrow, Thyrfing and Amon Amarth, with perhaps a dash of Insomnium's sad, arching melodic sensibility. The vocals are rather average for the style: audible and serious enough to convey the bloody conviction of the Gaelic, Norse or fantastical battlegrounds from which the band draws its lyrical inspiration, but never cutting or intimidating to the point that they live up to the vicious charisma in the timbre of the black metal forebears. The mix of the music is very clean and professional without sounding overpolished, and everything from the light texture of the keys to the cleaner vocals broken out for songs like "As the Snow Gathers" is well enough managed.

In the end, when it comes to the task of songwriting, Against All Odds doesn't offer the same compelling sense of adventure that some of its contemporaries or influences once culled, but that's not to say it is entirely without value. Despite being 50 minutes long, for instance, there are very few points at which the music ever becomes particularly trite or boring. There's a sense of airy, broad sadness affixed with robust enthusiasm that captures the 'epic' motif the band were obviously aiming towards, and though I found the lyrics (that I could make out) a bit cliche in their imagery, Eternal Helcaraxe manages to somehow avoid the claptrap of 'giddiness' that often fouls up this sort of atmospheric pagan/black sound. Nothing novel or necessarily inspirational here, but a decent soundtrack for tracking your enemies' bloodied footprints across the frozen wilderness.