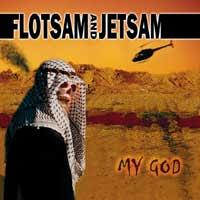 Of all the ten Flotsam and Jetsam full-lengths to date, My God is easily my least favorite, because even if you strapped me onto a gurney, grafted earphones to my flesh and subjected me to some Pavlovian therapy of rewards for repeated listens, I doubt I could remember a damned thing about it come the following day. It's just that underwhelming, which is sad considering that it features what must be the best production on one of their albums since arguably the debut. Musically, this is a fraction more 'thrash' than Unnatural Selection, but otherwise quite similar with its incorporation of more modern groove metal elements and attempts at a melodic, accessible balance of its elements that might mainstream it. Most notably, there are a lot of clean guitar sequences that sound like wimpy 90s duds circa something like Queensrÿche that disperse the heavier build-ups.
My God frontloads its better content with the solid, mute-strewn melodic thrasher "Dig Me Up to Bury Me", which if nothing else highlights just how much cleaner the record is than any of those to come before, and Eric A.K. Knutson's vocals sound quite good here. However, despite its level of aggression and suitable complexity, there are zero money shot riffs, and the bouncy groove bisecting the tune is quite weak in of itself. "Keep Breathing" is another number that features a few stronger guitar sequences, but the grooves and clean segments don't do the spikes of inspiration much of a service. And then, with both of the following tracks you get more of these proggy cleans that feel all too wimpy for Flotsam; just as numbing as any of the more ballad directed pieces on, say Drift or Cuatro. The leads here are admittedly superior to those found on Unnatural Selection: songs like "Camera Eye" have a sense of excitement to the solos that feels more engaging anything else in their environs, and clearly the addition of Mark Simpson to replace former guitarist Michael Gilbert wasn't a detriment.

Alas, My God suffers heavily from lack of memorable songwriting and more of those everyman, uninteresting lyrics in which they try to craft these clever lines like 'I'd show you all my self esteem/but I lost it somewhere down the road' or 'I don't know if I'm down in the dumps/But it sure smells like trash to me'. While I can somewhat agree with the sentiment of the subject, I really don't think Islam, even that practiced by extremists, is quite so easy to pigeonhole as they do in the title track. "Trash" in general is a pretty dumb prog metal song, and the acoustic/blues version included as a hidden track is even more regrettable. At best, this is painfully average and fizzles out considerably after the first few tracks, never to restore itself or compel the listener to give a damn. Like Unnatural Selection, it seemed a bit out of touch with everything else going on around it, and the best I can say is that this would be the last album to feature that shitty logo they started using on High. Perhaps it isn't completely terrible, but My God is best avoided unless you really, REALLY loved Unnatural Selection, Drift and Cuatro.