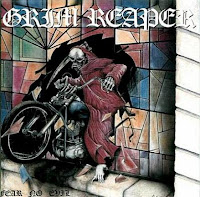 The cover of Grim Reaper's sophomore album has ever struck me with a number of questions, not the least of which is: what the fuck are we paying you for, Death? Not to break stained glass windows with your motorcycle, that's for sure. I suppose what the Harvester of Souls wishes to do on his lunch break is of no real import to the quality of the music contained within, but I always thought this image was laughable. Breaking a window. Oh yeah, what a bad ass. A fucking four year old can break a window. You're the angel of death. I know you're excited that Steve Grimmett and Nick Bowcott decided to upgrade you with some new wheels and have the old horse put down, but vandalism? That's pretty low, dude.

Otherwise, Fear No Evil is pretty much anything you liked about See You In Hell, only sounding a whole lot slicker and more appropriate. The raw volume of the guitars has been dialed back to really fit the drums, and they were approaching a level of quality fit to the hard rock and 'eavy metal bands like Def Leppard and Iron Maiden that were the more smashing successes of this particular scene. More importantly, Grimmett had improved as a vocalist between 1983 and 1985, with a more delicate restraint to his vocals overall, but still not afraid to shout his damned lungs out where it feels more appropriate, and some better proportioned screams. The simpler chord progressions remained, tempered with a fraction of chugging heaviness ("Fear No Evil") and Bowcott's knack for screaming, classy little melodies like the tapping intro to "Never Coming Back", lead in the bridge of "Lord of Darkness (Your Living Hell)" or the gleaming neo-power metal that inaugurates "Lay It On the Line".

The riffs were still very much in line with what was hip and hot in its day. For instance, "Matter of Time" is similar to something like "Breaking the Law", and a lot of other note progressions are similar to the "Neon Knights" style Black Sabbath, Judas Priest circa 1980-1984 or even a dash of Holy Diver or Accept's Metal Heart. Well enough written, but nothing exemplary or all that unique. In fact, I feel like Grim Reaper were relying pretty heavily on the personality of Grimmett to carry the band. The rhythm section here sort of follows alongside the guitar, the bass sounding a little less noticeable than even the debut, but never standing out despite the better production values. Wherever Bowcott flexes a little creativity and rises to the fore, the music becomes admittedly more interesting, but even though songs like "Fear No Evil", "Lay It On the Line" and the ripping "Fight for the Last" are among their best, this is still not top shelf material during that whole NWOBHM period which was being subsumed by the faster, more aggressive genres like speed and thrash that were taking over in the mid 80s.

No outright terrible tracks, but certainly "Rock and Roll Tonite" feels a little limp with the lame chorus cycle. I'm also not that fond of the closer "Final Scream", since the vocals seem a lot less memorable or inspired than the rest of the album. The other seven, however, are about as tight as Grim Reaper would ever sound, and ultimately I think Fear No Evil edges out its followup Rock You to Hell in terms of its sum strengths. This was good enough to get the band onto a bigger label (RCA), but not enough to place them among the ranks of their more recognizable countrymen. It's also decidedly less 'cheesy' than the other albums, beyond the cover art, since nothing here seems quite so awkward as "Suck It and See" or "The Show Must Go On". Just some solid, relatively consistent heavy metal and still fun to break out once in a while.
Verdict: Win [7.75/10] (fear will take you when it likes)