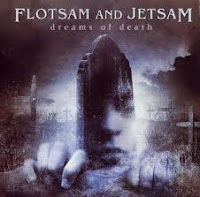 While I admire Flotsam and Jetsam their longevity amidst the constant turning of the wheel that is metal music, I can't say that I've been excited for or looking towards anything they've put out since When the Storm Comes Down, which in itself was a disappointing followup to the band's magnum opus No Place for Disgrace. Dreams of Death is just another case of the band falling short of its untapped potential, and it's not the phoenix we all hoped would rise from these undying ashes, but hell if it doesn't at least start out with a bang, and it proceeds to outclass My God in just about every department other than its production quality.

The Travis Smith cover art is admittedly trendy, but along with the simplified font of the band's moniker, it lends the album a mature character that had been absent for a great many years. Hell, with the exception of the similarly dressed 2010 effort The Cold (also by Smith), it's the best cover in their whole canon, No Place... included. But what's more, there was a simultaneous sense that Flotsam and Jetsam had fully returned to the hybrid power/thrash which spawned them, and executed a fluid grace in the first few songs here that were easily better than anything the band had put out in 17 years prior. Unfortunately, like the album before it, Dreams of Death treats us with the better material up front, and then sort of fades off into the backdrop with the ensuing songwriting. But this time, at least the first few tracks have a semblance of enduring quality to them.

"Straight to Hell" is one such piece, opening with a straight surge of energy that includes some clinical tremolo riffing that one would never really expect from the Arizonans, and then a lush dual melody sequence flowing alongside the verse. The tune seamlessly shifts between eloquence and power, and while it wasn't perfect thanks to the pretty mundane mid-paced palm muted guitars used to transition the better bits. "Parasychic, Paranoid" is likewise strong, a brief and controlled burst of surgical thrash that seems like a tag-team between late 80s Flotsam and Denmark's Artillery from the same period. Love the little melodies, once again woven through the verse, though they are almost done a disservice by the low volume. Again, they belt out this tremolo riff akin to old school thrash/death metal that takes one by surprise as it lurches into the playful leads, and by this point I had every hope that Dreams of Death was really the album I had been waiting for...

Well, it doesn't really hold up, as much as the band tries. Later thrashers like "Childhood Hero" are rooted in banal, mediocre mosh riffing, and there are far too many slow spots on the album like "Bathing in Red" or "Bleed" that continue that wannabe progressive nature of the previous album. Also, the bloated closer "Out of Mind" is an unfortunate contrast of bland thrash guitars and more inspired spikes of melody that in no way fills out its 12 minute bulk with anything hinging on the level of attention holding required for such a feat. I also didn't care for the piece "Nascentes Morimar", an instrumental with generally clean guitars that seems like something Joe Satriani would have included with Flying in a Blue Dream...sans the catchy leads.

Eric A.K. sounds decent, but this is not one of his more memorable performances as most of the vocal lines are entirely throwaway. I also felt that the mix was a bit dry, lacking the depth of its predecessor and perhaps that went a long way to subduing some of the heavier riffs. So, really, Dreams of Death plays out like a massive swan dive, opening with some attitude, charisma and well purposed riffing and then quickly plummeting into more of the same mediocrity they had been releasing for years. The lyrics were still mediocre, though not so sorry as a few of the albums before it, and the riffing quality just not prevalent. Again, we're not talking an awful record by any means, but a sinking ship. A shame, really, but not the first or last for this band.