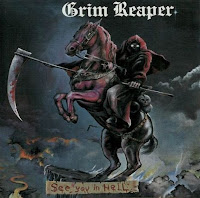 Grim Reaper is very often associated today with a few of the more negative stereotypes of metal in the mid-80s, especially when the prospective hecklers feast their eyes upon their few videos. Bad hair, inconsistent vocals that were often too jubilant for their own good, a lot of repetitive song hooks (across all three studio albums), generic lyrics and bringing absolutely squat to the table. Dubbing the band 'party metal' would not be far from the truth, since in general their songwriting was configured in a standard verse-chorus-etc. rock format (like many bands of their ilk), and while they weren't glam by any means, their interpretation of cliche subjects like hell, murder and other important topics always felt 'fluffier' or lighter than other bands of the same era (like, say Metallica) who were transforming the landscape of the genre into something more barbed, desolate and extreme.

But let's be honest: this genre wasn't build exclusively on the shoulders of brooding juggernauts like Black Sabbath. Bands like Deep Purple and Judas Priest had their fun fare, and I feel in listening through the Grim Reaper backlog that both, alongside early Dio-era Sabbath (Heaven and Hell, Mob Rules) were instrumental in shaping the sound here. Some will have read the story that these guys were 'discovered' after their victory in a 'Battle of the Bands', in which they bested over 100 competitors to take some prize, but considering that such contests are rarely more than ticket-selling races (for instant, shitty Evanescence knockoffs often win these things in my region, or bands who draw upon the support of their entire high school), I'd say that their emergence was more in line with the fact that British heavy metal was kicking all sorts of ass, a seemingly endless pool of talent that brought us Demon, Saxon, Wichfynde, Praying Mantis, Def Leppard and so forth, all peers to this band in terms of their ability to decisions to straddle the border between the heavier 'metal' and pure hard rock accessibility.
See You in Hell was a reasonable debut for its time, with a fairly simplistic formula that mixed predictable 3-4 chord riffing patterns with spikes of Nick Bowcott's melodies and the charismatic Steve Grimmett, who has through the years become the defining element of the band. He's got a timbre which occasionally reminds me of Ronny James Dio, with perhaps a more muscular edge to the sustained screams (like the end of "See You In Hell" itself), but lacking the late demigod's silken bite and overall intensity. Unfortunately, the mix of this debut was the worst of the band's three albums, and he's cast a bit too loudly throughout, with his tone really shaking apart songs like "Dead or Arrival" (the chorus) or the bluesy lounge rock piece "The Show Must Go On" that I've always found a little 'fish out of water' among its neighbors here. In addition, the guitars are a bit too raw and unpolished for such streamlined compositions as these, the drums a bit distant, and See You in Hell feels more or less like a demo quality recording in dire need of an upgrade.

That said, there are quite a few enjoyable tracks here which would have gone off well in the live setting and remain among the band's catchiest. "See You In Hell" was the standard by which the band would write the majority of their future chorus parts for the successor albums, and it has a few nice screaming twists to the verse lines. "Run for Your Life" and "Wrath of the Ripper" incite pure headbanging fury even despite a few of the campier vocal passages, and Nick Bowcott truly tries to let his leads scream out with some level of emotion, eschewing the rather tame confines of the songs' architecture. Even "The Show Must Go On" has that catchy line in the intro over the clean rhythm guitars, though I still find it out of place. But others here are not so special, like the crunchy closer "All Hell Let Loose" or the shorter, forgettable cuts like "Liar" or "Now Or Never".

Compared to, for example, three of the big Ps of this same year: Power & the Glory, Piece of Mind, or Pyromania, this album feels really roughshod and unrefined. I suppose that's a boon for certain gluttons for might hunger for rawer tones in their 80s diet, but I just don't feel that it always works with the music (the band obviously agreed, since both the later albums are cleaned up considerable). This isn't Venom here, the band was striving for some degree of accessibility. But it's not just the production that falls behind; the actual songwriting was nowhere near as memorable as a lot of Grim Reaper's British peers. A gem yet to be cut, its surface implying an obvious material value within that has yet to be 'reaped'. Still, if you're looking for something dimwitted, entertaining and loud to slake your nostalgia, or you've a fondness for other Ebony Records cult classics like Savage's Loose 'n' Lethal or Chateaux's Chained and Desperate, See You In Hell isn't a bad record. It's got clear problems, a few dud songs, but still seems functional almost 30 years later.