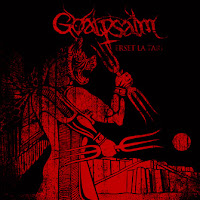 I don't get the opportunity to experience an album like Erset La Tari often enough, but thanks to Aesthetic Death, the sweat of nightmares has once again manifest upon my brow. I am humbly unsettled by the auditory madness of the Russian trio known as Goatspalm, who perform in the niche of black ambient with a strong emphasis on ritualistic mythology rooted in the ancient cultures of Sumeria, Central America and perhaps Phoenicia (at least I'm assuming from their choice of 'Baal' prefixed stage names and the lyrics). Erset La Tari is comprised of a pair of 20-ish minute tracks connected by a shorter, six minute ligament known as "Bab-Illu", and the listener is constantly assuaged by a sense of eternal discomfort and damnation.

There is certainly a modicum of the black/ambient influence you might recognize from an act like the Swedish Abruptum, but its ethical overtones and ritual environs also remind me quite a lot of the Egyptian-focused dark ambient act Herbst9, or perhaps In Slaughter Natives. The first track, "Utuk-Xul" opens with gentle winds and gradual, distant resonance while the rasps and whispers echo in sparse, disjointed paeans and poetry. Guitars are spliced liberally above the sweltering backdrop, often in little trilled patterns but eventually you'll encounter some chugging near the middle of the piece, minus metal percussion. Instead, the trio incorporates tribal drums to great effect here. The other long-player, "Under the Trident of Ramanu" uses the guitars in a more structured, metallic sequence which certainly bears the aura of traditional black metal but spaced out almost as if it were an older Summoning track, synthesizers glistening beneath the primacy of the drudging distortion, but later the track devolves into carnal noise.

Meanwhile, the middle bridge piece "Bab-Illu" is perhaps the most Eastern and exotic of the three, with some arabesque guitars over the swelling subtext of lush noise. Curiously, the sequential progress of the music seems to banish the audience into an increasingly hostile node of hell itself, increasingly disturbing with only the shorter piece to ofter any sort of harmonic respite from the oppressive atmosphere. Combined with the invocations of the lyrics, and the killer deep red and black packaging of the booklet, Erset La Tari seems to truly revel in its grisly antiquity, and draws the ear not with melody or grandeur, but the stirring of ancient dust and the restless dead. This is not music you turn towards for its 'catchiness', but an immersion into the obscurity of a reality you've never known, and if lucky, never will. A cloak of the grotesque and forgotten worn proudly on the shoulders of three very evil men. A terrifying tempest that is well worth the ride.
Verdict: Win [8/10]