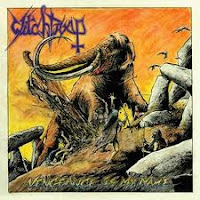 They might not have developed much buzz in the underground until this past decade, but Colombia's Witchtrap has been around for a good 20 years now, busting out into the international black/thrash awareness with their 2002 debut Sorceress Bitch, an album I have previously reviewed and enjoyed. Much like any band with a 'witch' conjunction these days, you can expect something undeniable old school about their sound, and in this case it's a clear tribute to the titans of old Teutonic thrash (Kreator, Sodom, Destruction) with a dash of old Venom, Metallica and Bathory thrown in for good measure. The vocals in particular sound quite a lot like a South American Mille Petrozza, the different and distinct accent of 'Burning Axe Ripper' not withstanding, but I'd say as far as the riffs alone they're not always derivative of any one particular influence.

By now, we've already heard a million of these bands, from Witchburner to Nocturnal to Deathhammer to Aura Noir, all of whom make for perfect patches on the denim vests of nostalgia. Still, it really comes down to the actual songwriting as to whether these acts are worth their salt or mere shadows of their influences, and rarely is it the case where I'd rather listen to one of these albums over Sentence of Death, Pleasure to Kill or Persecution Mania. Witchtrap writes in a pretty spry format with exciting licks caught in a pristine production that allows for the thicker grooves of the bass and the snap of the drum to support the central riffing without ever being eclipsed, and I like that they occasionally throw in a bit of unique spunk like the bass in the verses of "Damned to the Core", or the slightly classical appeal to the riffing patterns of "Venomous Breath", whose melodic nature wouldn't have been out of place on an Artillery record like Terror Squad or By Inheritance.

The issue I had with Vengeance is My Name is that there's a clear line between the better songs and those which seem less inspired or instantly catchy. For example, the closer "I'll Take Your Head" starts off with a pure Kill 'Em All vibe and then accelerates into pure Kreator/Cranium carnage, and "Venomous Breath" has some very well thought out triplets, but I felt like there were others like "Put to Death" and "Metal" that felt like average Aura Noir fare at best, and the aforementioned cleanliness of the production doesn't lend it the savagery of, say, the recent debut Forbidden World by Sweden's Antichrist. Still, the Colombians know how the territory well enough that they manage to keep the range of riffs dynamic, the leads tight and appropriate, the lyrical subjects coiled about the usual suspects of demons, succubi, murder, revenge, Hell, and of course the headbanging audience itself. Vengeance is My Name is probably my least favorite of their albums to date, but it's competent, and not without a few moments of authentic witch-shine that might appeal to fans of similar retro black, speed and thrash acts.
Verdict: Win [7/10]