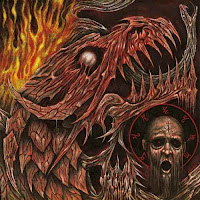 I've been hearing about Pseudogod for a few years now, so I've no doubt that Deathwomb Catechesis, besides possessing what might be the most memorable album title of the year, is a highly anticipated full-length studio debut for the Russians extremists, with a clear cross cultural appeal to the fans of both old school death and primal black metal aesthetics. They've a sound that's not all that simple to pin down: perhaps a few drops of blood from hybrid forebears like Blasphemy, Angelcorpse, Proclamation or Revenge, awning gutturals that occasionally remind one of Incantation, and a bit of that belligerent, percussion driven riffing that Quorthon wove into the late 80s Bathory records like Under the Sign of the Black Mark or Blood Fire Death. In general though, the Russians do an excellent job of blending all these ingredients together into a savage and forceful experience that, while not exactly perfect, is like to appeal to just about anyone wearing a denim or leather jacket adorned with any semblance of inverted cross.
Deathwomb Catechesis represents pure, unadulterated hostility carried out in simple, barbaric riff patterns that flex between bursts of accelerated violence and slower, driving walls of chords. The drums in tracks like "Vehement Domination" or "Azazel" are very often more busy than the actual guitar progressions, so you can tell they were really reaching back for that nostalgia of the formative black metal years, but still willing to strong arm the audience with copious double bass thunder and effortless blasting. Combined with the ominous guttural vocals though, Pseudogod feels incredibly tight and consistent. I can't vouch for a lot of the individual riffs here, they all function on familiar structures that we've heard in countless works of black, death, or even grind, but each piece of the puzzle is combined into such a Hellish whole that Deathwomb Catechesis develops a personality despite its lack of particular nuance or complexity in the guitars.

There are points on the album, like the breakdown in "Necromancy of the Iron Darkness" in which they come across like this primordial, blackened alternate to late 80s Bolt Thrower, crushing the shit out of the listener like a tank draped in the skeletons and entrails of the damned; or the intro to "Encarnación Del Mal" which simply explodes from its foundation chords and then later contracts with a brutal, hammering confidence as the drums shift tempos below the verse. The guitars, vocals and drums alone create enough of this rank, airy atmosphere that added embellishments are hardly necessary, you really feel like you're being dragged through the vaulted caverns of some unpleasant afterlife to be tortured at the whim of not fiendish, despotic diabolists, but some manner of infernal neanderthals that will club your flesh against the subterranean walls until your bones are shattered into powder. While I wouldn't have minded some more intricate, haunting guitar patterns woven into such troglodyte rituals, Deathwomb Catechesis as it stands is still a horrifying experience not to be missed. Pure hate.