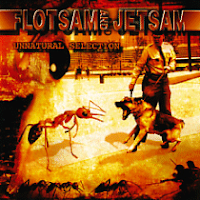 Unnatural Selection has a bit of a bad rap for incorporating notable elements of the groove metal that was popular in the mid 90s, but I have to say that it's at least better than the three albums leading up to it. The band's second album after returning to the Metal Blade stable, it suffered somewhat from not having any relevance to what was going on in its day, and thus a general lack of interest, since the Gothic/fairy metal, melodeath and metalcore scenes were really vaulting into the stratosphere. There was also a bit of redundancy here to the lyrics, a lot focusing around personal addictions ("Liquid Noose", "Chemical Noose", etc). In general they're quite bad, with one song ("Fuckers") particularly awkward and embarrassing, but Flotsam and Jetsam were never strong in this department, and just about everything scripted from When the Storm Comes Down on could have used revision, even if the actual subjects were appropriate.

A lot of the groove elements hit up front, with "Dream Scrape" hammering out some rhythmic bounce circa Sepultura's Chaos A.D. and a dense, funky bass tone that is more than a little reminiscent of Korn, if not as utterly dominant. The second song here, "Chemical Noose" might as well be a Prong song, it uses the same percussive sense of harmonics and muted thrashing momentum that would have placed it comfortably on, say, Beg to Differ if not for the lyrics. A little ironic, considering their former bassist Troy Gregory had joined that band. However, what I found appreciable about this album were the catchy vocal lines conceived by Eric A.K. and the gang. There's a lot of melody and passion to songs like "Brain Dead" and "Promise Keepers" which shows that those years spent flirting with the mainstream on Cuatro or Drift were not entirely wasted. In particular, that latter song has an interesting fluctuation of Pantera groove and these ethereal male choirs in the chorus that feels totally unexpected.

The guitar lines are also quite creative here, a mix of hard rock, thrash and even some semi industrial or post-hardcore sounding structures that obviously were pretty well thought out even when they don't completely deliver the goods. New drummer Craig Nielsen stepped in for Kelly David Smith (who has since returned), and his busy rock beats are a good match for Jason Ward's thick, plunking bass. The leads are frivolous and rarely memorable, but I feel like there's a more distinctly 'thrash' feel to this record that trumps its predecessors between 1992-1997 even if it still relies on some degree of accessibility. Knutson's work here is pretty catchy, with the possible exceptions of "Falling" where it seems a little more melodic than necessary and of course the aforementioned "Fuckers", which is one of those lame ranting songs that seems, to the audience, targeted to no particular individual, but to the band probably a critic or backstabbing friend or ex-girlfriend. The lyrics suck, the boring grooves supporting it suck, and it should have been left off.

On the whole, though, I found myself playing the songs in my head more repeatedly than any others since maybe "The Master Sleeps", so I can't claim that Unnatural Selection is quite so miserable as it's oft made out to be. A lot of the riffs are dead weight, I couldn't care less about some of the groovier tunes like "Dream Scrape" or the slow burn of closer "Welcome to the Bottom", but a few tunes like "Brain Dead" are loaded. Not a triumphant return to form, but it's certainly not scraping the bottom of the barrel either like its all too mediocre successor...