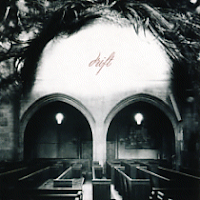 I remember first seeing the optical illusion cover image for the fifth Flotsam and Jetsam album and filed it away in the 'different but cool' cabinet. Of course, after Cuatro, I was not exactly looking forward to any output from the once great Arizonans, but inevitably my curiosity got the best of me and I wanted to see if the music itself had undergone some sort of revolutionary evolution along with the choice in artwork. I was surprised to discover that Drift was a bit more straightforward and metallic than its predecessor, and honestly a fraction superior in terms of quality. The lineup from Cuatro had remained, and they'd even reined in Neil Kernon once again to handle the production and some of the mixing. However, it's ultimately just as banal as its predecessor, and there's a good reason why so many I've spoken to struggle to even recall its very existence...

Drift opens with a tune called "Me" which is a bit of a choppy hard rocker with a few melodic tremolo mute patterns that collide into the rock configuration of the chorus, but despite the questionable use of 'what I take I take on the chin' as a vocal line, it's peppy enough to have a little fun with. Once "Empty Air" arrives with that electronic intro that bursts into the big bass lines and guitar grooves, though, you can tell that Flotsam were still pretty settled into the idea of becoming a more commercially viable heavy rock band with only traces of their former selves present in the songwriting; that they were still trying to rise to the shifting landscape of the 90s and unearth some fresh new sound that was going to rejuvenate their following. Not bloody likely when half the album consists of rock songs like "Pick a Window" or the almost Western feeling power ballad "Destructive Signs" (which feels a little like Death Angel's "A Room with a View"), but at least they prove that, in a kinder world, they may have had the chops for the passive, mainstream radio rock audience.

A couple of the songs, like the bass driven "Smoked Out" or the biting groove-fest "Blindside" manage to retain a bit of the band's original aggression, though once again we might argue that these were trying to be alt-metal or grunge and have very little to do with the power/thrash that initially fueled Doomsday for the Deceiver. Lot of bluesy little guitar fills and leads, and really there are only a few cuts here like "Remember" that possess the proper muted thrash riffs you might recall from When the Storm Comes Down. Eric A.K. sounds decent once more, but the performance here is a little less balanced or dynamic than Cuatro. He's a little more incendiary, or acidic, and in places redolent of No Place for Disgrace, though I wonder why the rest of the band couldn't also 'regress' and beat the tar out of us with the actual music.

In the end, though, despite my stylistic indifference towards a lot of the sounds that went into Drift, it's not poorly written for what it is. A number of the tracks are weak, and few of them are compelling beyond a few minutes' exposure, but I feel like it's an inch harder than Cuatro and pretty tightly structured. Just be warned that it's NOT the Flotsam and Jetsam you worshiped from 1986-1988: aside from the vocals, and a few throwback riffs, this is a polished, modern take on hard rock. The lyrics suck, the worst they had written to its day. It did not do well for the Arizonans, who would in turn not be able to renew their deal with MCA, and instead drift back over to their alma mater Metal Blade Records...hopefully to come to their senses and remember exactly what the fuck they were doing in the first place.