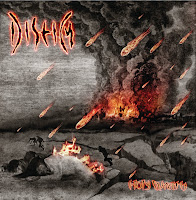 The first trait that stood out to me about Latvians Diseim on their debut Holy Wrath was the strange approach of the vocalist in the first track, simply titled "Black". The band lays out this staunch, muddied death-groove, he barks out a few normal guttural lines and then it sounds as if the guy is wrestling with himself or lifting something so heavily he's about to get a hernia. The oddity passes and we get a pretty average slew of low end thrash/grooves and breaks of melodic death metal, but the conscience still feels soiled from just that first minute or two of the song. Sadly, I didn't find too much else on the album that really stood out to me. A pity, because the band could really have worked that dense, sludge-like guitar tone into something really distinct, morbid, and threatening.

In Diseim's defense, they do come up with some creepy, atmospheric riffs like the intro to the titular "Holy Wrath" or the similar "Insanity", simplistic sequences that are given added berth due to the massive guitar sound. But once they pick up to faster grooves or muted death/thrash note progressions, I felt a lot of familiarity and nothing quite stood out to the ear. Most of the vocals are decent rasps or gutturals, but nothing you've not heard a lot before, and while I like the natural feel to the drumming and the fact that the Latvians do not conform to any one niche particularly, they never seem to manifest this into a strength as far as the writing. Sure, the tunes hang out around the 3-4 minute mark and never overstay their welcome, and they've got some admitted ability at pacing out the more doom inflected pieces like "Agony" or "Witch", but in general I found a dearth of quality hooks that could glue my ears.

For a broad comparison, I'd equate the band's sound to US acts Autopsy and Cianide, who both had (and still have) a penchant for an open, churning guitar tone. Throw in perhaps a bit of Slayer's late 80s moodiness and the groovier, rock influenced Entombed (Inferno, Uprising) and you're within driving distance of what Holy Wrath offers. There's something sincere, grimy and down to earth about the music that I find it difficult to really dislike, and though they're juggling 3-4 styles here that are more often performed as separate entities, they manage to fuse them into something agreeable. In the end, I just never felt all that fulfilled by this particular crop of tunes, but the roots are strong: if they keep planting in this soil they're bound to yield a grisly, effective harvest down the line.
Verdict: Indifference [6/10]