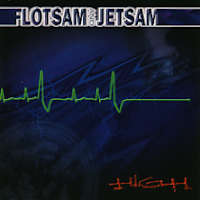 It's sad to me that the first thing most will remember about the sixth Flotsam and Jetsam full-length High will be the fact that they listed the song titles on the back each with their own knockoff logo of a famous metal act that influenced them. A sweet little gimmick, but if you thought that this some how would infer that the band were going to put out an effort WORTHY of those roots, then I'm afraid you would have been mistaken. High is a more metallic effort than either Cuatro or Drift, to be sure, and there are a number of tunes I wouldn't kick out of bed for crackers, but in the end it's just another of those many, modernized thrashings of the mid to late 90s that fail to evoke the power and potential of the prior decade, the immortality that for some strange reason the genre exuded before succumbing to a trite and dated commodity.

Songs like "Hallucinational", "Your Hands" and "It's On Me" certainly have their hooks, and they at least seem to recognize the band's power/thrashing foundation if not fully implement it, but then there is another chunk of the album devoted which pursues a more trendy, groovy rock side that I'd expect out of Black Label Society or Corrosion of Conformity (after they stopped being cool). "High Noon" is particularly guilty of this, a rather blase bluesy stoner rock oriented song, but songs like "High" itself and the moody saloon rocker "7 Lucky Day" are also more or less barking up the same tree. "Monster" wouldn't have been out of place on the previous album, a rather quirky hard rocker with a bit of that Black Album or later Metallica groove, and even some of the more straight and aggressive pieces like "Toast" seem to suffer from a lack of strong riffing progressions or compelling ideas.

I think the production here also took a slight nosedive from the prior two albums, having switched from Neil Kernon over to long-term Metal Blade associate, A&R director and at one time vice president Bill Metoyer. The lyrics are pedestrian at best. The vocals feel more repressed, the guitars a little more humdrum and sludgy, though to be truthful it does rather match the more groove oriented, low end writing, the burning bluesy leads, wah wah pedaling and other components. This was still the same lineup as they'd been using for two albums prior, and they certainly feel gelled together and on the same page, but ultimately High delivers nothing more than a steady pummeling at its faster moments, the sort you'd not scoff at if you were looking for a Friday night bar fight in some obscure suburb in the middle of fuck. But it's no 'Saturday Night', if you catch my drift, and the switchblades and motorbikes have been supplanted by butter knives, Tonka three wheelers, and the dulled fisticuffs of missed opportunities.
Verdict: Indifference [5.5/10]
(I know it seems like I like falling)