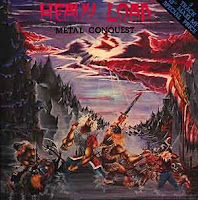 Thematically, Metal Conquest might not stray far from the 1978 Heavy Load debut Full Speed at High Power, but in terms of its sheer muscle, the EP is a far better representative of the Swedish veterans' enduring legacy upon the scene to follow them. After the embarrassing performance of their first label 'Heavy Sounds', the Wahlquist brothers decided to go the DIY route again and create their new imprint, Thunderload, a truly appropriate title when you hear the sounds the band is belting out on the five tracks. Meatier guitars, manlier vocals, and a firmer grasp of how to drive home a vocal chorus hook transported this material away from the Judas Priest and Black Sabbath comparisons of the debut towards the realm of molten girth that characterized Anvil, Manilla Road, Manowar and the almighty Thor during the dawn of the 80s.

"You've Got the Power" throws you straight into the grinder with its beefier riffs, the Load now sporting the added guitars of one Eddy Malm. Simply, mid paced mutes and swinging chords lead the track into the sheer escalation of the chorus, and gone are the scattershot vocals that dirtied up the debut. The band also had a new bassist by this point (Torbjörn Ragnesjo), and both he and Malm would remain with the band through the rest of their recordings, thus lending a sense of strength and solidarity to the music which was all but absent in the 70s. I wouldn't say that the actual guitar progressions in the music here were all that impressive, clearly ridding upon the coattails of Judas Priest, and often proving rather dull wherever the vocals cease their soaring accolades, but at least in tracks like "Dark Nights" and "Heavy Metal Heaven" they generate some atmosphere through the use of moody melodies and decent, bluesy leads. The drums don't feel so dynamic as the first album, but they do their job ably, and the deeper pump of the bass manages to retain an identity even if it's not so perky as it had been.

They continued to ramp up the Viking savagery and 'metal warrior' imagery here with the lyrics to tracks like "Heavy Metal Heaven" and especially "Heathens from the North", which is this slower moving monolith of testosterone in which the band experiments with multi-layered male chorus vocals and a desire to create this ridiculously cheesy but apt atmosphere to celebrate a cheapened version of their own ethnic history. To that extent, they clearly had the jump on New York's Manowar even if their sound wasn't quite so crushing or memorable. In the end, though, while Metal Conquest is a slightly superior, more cohesive and compulsive offering than Full Speed at High Level, it's not quite the apex of the band's songwriting or ability to drive a hook into the listener's ears harder than Mjölnir. But we wouldn't have to wait very long...
Verdict: Win [7.25/10] (got to listen to that music again)