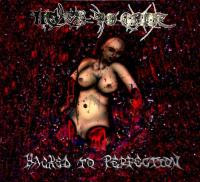 While I can't remember the last new act to emerge from the Florida death scene (must have been Hate Eternal) worth getting worked up over, Never to Arise seems well up to the task. If the material on Hacked to Perfection is any indicator, this is just about the most riff driven duo of butchers to hearken from the US since the superb Horrendous. Don't be fooled by the lackluster cover art and logo font, this pair is not some come-lately group of indistinguishable brutes writing the same song and dance we've heard erupting from a million tween mosh pits, but fairly intricate songwriters who hold true to the precepts of the genre without losing the requisite edge of hostility so important to maintaining the audience's attention span.

The album does come with one caveat: the drums are programmed, which for some purists might prove a distraction. But that said, I think Gordon Denhart has done an ace job of balancing the levels and keeping the blasts, double bass tempos and fills dynamic enough that they adjoin themselves to the structures of the guitars most fittingly. And, frankly, with riffs that are written this strongly, the percussion itself soon fades into the backdrop as you pummel your neck through each twist in direction, each manic and muscular breakdown, and each flurry of clinical death/thrash infusion that permeates worthy exhibitions like "Hyperbaric Torture Chamber", "Bereft of Conscience" and "The Femicidal Impulse". There's not a single track that goes by without something engaging to the ear, some fit of brilliant execution which highlights not only the mechanistic proficiency of both guitarists (Denhart and Michael Kilborn), but the wealth of old school influences they bring to the table without seeming dated or erratically nostalgic.

I heard everything in this from the choppier Floridian forefathers like Malevolent Creation, Death, Monstrosity and Deicide to the more technical, formative aggression present in the Suffocation and Cannibal Corpse records of the mid through late 90s, with even a hint of Dutch demigods Pestilence (Consuming Impulse) in the heavier chord sequences and vocals. Speaking of which, Denhart has a great, blunt tone to his gutturals that he offsets with more salacious snarls and growls for this claustrophobic effect that feels like being imprisoned in a malpractice ward as you await both torture and the extraction of your vital organs. Plenty of leads and tremolo picked, creepy melodies cut into the meat of the low end that the album constantly offers contrast and variety, while remaining wholly consistent for 50 minutes.

I can't say that every single riff offered up on the album is equally irresistible, but the fact that they can pull off a 9 minute tune ("Misogynistic Acts of Barbaric Sadism") without even bordering on banality speaks volumes for their effort and creativity. Almost any complaint I could possibly launch against this album comes would be rooted in mere aesthetics: I thought it was ugly to look at (and not in a good way), the drum programming will not suit everyone and perhaps a bit more could be done with the bass (it's present, but rarely stands out against the guitars and vocals). Otherwise, Hacked to Perfection is very near to its title in delivery, a duly noted and impressive debut which helps curb death metal back to its origins: confident and ghastly compositional skill that spikes their pathos into your skull like the gravedigger's spade striking the cemetery dirt after midnight.