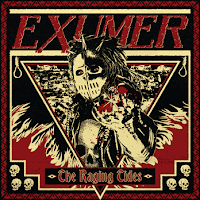 I've never had the same level of cult appreciation for Exumer as some other thrash heads. To me they were on the level of a group like Assassin, or Necronomicon, who put out one solid 80s album before an inconsistent sophomore, then quickly faded into obscurity rather than aligning with the Teutonic masters in the field. Of course, just about every damn one of those B or C-list groups have now reformed, with varying results...hell, even S.D.I. just recently put out a new record. Exumer has gotten some praise for not only putting together some competent material for their 21st century run, but managing to improve themselves in the process. I can't say that for the band's proper reunion record, Fire & Damnation, but I can see why the group's fourth record, The Raging Tides, turned some heads before it commenced banging them, because if nothing else, it's about as consistently 80s as you could wish for.

Now, don't take that as a glaring recommendation, because I still find the band's style a little generic and indistinct when there are so many other options, but unlike some bands...say Onslaught, who took on a pretty heavily 90s influenced thrash aesthetic via Pissing Razors or Pantera, Exumer has dropped an effort here that would have fit right in after Rising from the Sea and blown that disc to barnacles...err smithereens. This is unrelenting, energetic, full of choppy Bay Area style riffing and never scums out into some Lolapalooza mosh groove for dudes with bad tribalz. Granted, there's not a single damn new or interesting thing going on in the riffing department, but the tone is decent, and the riffs are at least hooky enough that you won't complain about them sucking, with a balance between more frenetic, tremolo picked passages and beloved, mid-paced Exodus meatheadedness. The leads are all well-placed, if frivolous, and the drums have a nice snap to them that kicks you along. You could probably cut and paste this stuff onto any number of other recent thrash albums that are informed by the members' 80s record collections, and then swap those albums' riffs onto this without skipping a beat, but hey, it functions.

Vocally they still remind me a lot of a mashup between other bands like Tankard and Vendetta, but the vocals are actually really well produced, as are the backing gang shouts. The lyrics read as if they could have been written for any decade, timeless and not terribly topical. I also thought the cover art was cool, they gotta stick with their mascot in total 80s thrash fashion, so you've got this Jason Voorhees looking dude representing on what looks like an old illustrated horror poster, bursting from the logo, with some extra skulls, fire and...nooses to fill up that negative space. They also include a pair of covers that are weird...the doomier "Forever My Queen" from Pentagram, which they mange to thrashen up a little with a nice lead. They also really amplify their cover of Grip Inc.'s "Hostage to Heaven" and make it sound more fiery with some gnarly vocals that often border on Exodus sneer. This was one of my fave tracks on the disc, along with some originals like "Death Factory" and "There Will Always Be Blood", and it really fits in with their own material. A decent offering here, if not outstanding, a slight improvement over Fire & Damnation, which wasn't so bad itself.