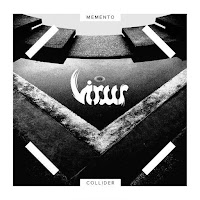 Memento Collider hits you up front with the most mystique of all the Virus albums, the jazzy, walking bass lines of "Afield" served up with eerie guitar strums and those almost preachy-sounding spoken word narratives that the band had really mastered on the previous disc, The Agent That Shapes the Desert. To a group already so experimental, this already felt even further along the axis of weirdness, with just the right amount of progression and spin on the band's thick, low-end driven formula that it feels like a distinct step. There are also pieces, like this one, which seem almost as if they were largely improvisational, especially with all those breaks in its belly, which don't seem super polished but really pay off when the group erupts back into the jangling upper strings and beats.

Elsewhere, it does feel a little more practices and coherent, like "Rogue Fossil", one of my favorite Virus tracks in general for that amazing, bouncing blend of bass and guitars, almost like a Fugazi exponentially evolved into something more mesmerizing, melancholy in motion. The hues this band casts here are almost all shades of grey like the cover itself, and the material sounds like a mind starting to unravel in some corporate clean-space, stimulating itself with disjointed grooves. Those odd Voivod-like chords, with the saturation removed, clash into the more dextrous little fills and trills perfectly, and there are occasionally these walls of odd, vibrant chords which almost remind me of late 80s Sonic Youth and all their unusual tunings. Though the band will swap between tempos and riffing structures, I would actually say that a lot of the material is very consistent together, this is not a highly diverse album in of itself, but within even this little niche they find ample territory to explore that the full 45 minute experience never once bores me, and only tires me out due to the exhilaration and helplessness that comes with the realization I could never think up something this goddamn cool.

The one exception might be the closer "Phantom Oil Slick", because here is a track where for me the guitars came across just as level and powerful as those bass lines, with neither suffering. But even that, with the similar vocals gels so well with the material leading up to it, though I wasn't entirely sucked into the slower, broken ambient segue in the bridge, at least not until the bass finally takes over as the dominant instrument with the sparser chords splayed out above it. The title is too fitting though since this part of the song makes you think you're out on some foggy sea, drifting in a rowboat and perhaps running afoul of said oil slick. At any rate, listening to these Virus albums now for review is kind of making me sad that I won't get another one. Ved Buens Ende will be close enough, but interesting genius like this is all too rare, and even if I love this album a fraction less than Agent, it's still another one that will remain timeless escapism for when I need to exit the monotonies of my existence, or find new things hiding in the shadows in the corner of that reality. Inspired.