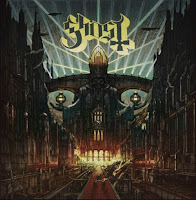 Meliora was the Ghost album I most immediately glomped on to, from the initial release of the "Cirice" single and it's entertaining, strangely alluring video, the ensuing teaser singles ("From the Pinnacle to the Pit" and "Majesty"), onto the full release in August of 2015. I loved just about everything I was hearing, and with a few minor nitpicks, this remains my favorite of their catalog. Granted, I rate this one and the debut about the same score-wise, but the level of stylistic flexibility and the insane level of catchiness here push it just a fraction of a fraction beyond Opus Eponymous. This stands the point where the band's pop, retro, metal and occult ingredients were held in a near perfect balance, and for me the full proof of the band's concept, a bevy of memorable riffs, lyrics, and vocal lines that were all a match for the band's theatrical, sacrilegious live celebrations.

I won't go into detail on every single track, but it features one of the best 1-2-3 punch combos for opening songs that I've got in my entire music collection. The rousing "Spirit" with its eerie and endearing synth-lines, building through a steady driving verse into its epic chorus, a glorious hymnal dowsed in proggy keyboards and choirs. The groovy "From the Pinnacle to the Pit" with its fat, throbbing bass lines, creepy guitar harmonies, and excellent drumming that shifts around until this one too hits a monumental chorus. "Cirice", with those morbid acoustics that lead into one of the best doomy rhythm licks I've heard in my entire life, and some of my favorite lyrics in their discography. Each of these tracks scores on every level, from the strength of the riffing, the ebb and flow of Papa's gracious vocal chords, to the slight bits of nuance like timpanis crashing or smooth, simple leads. The minute-long string instrumental "Spöksonat" is a wee bit useless, but at the very least it sets up the closing segment to their future single "Rats" off the following full-length Prequelle. And right after that you're getting "He Is", the band's ultimate, beautiful mockery of some soaring Christian arena rock power ballad, you can just see the lighters flicking on out in the crowd, but the crucifixes being inverted as they're raised towards the stage.

The only songs that I really wasn't in love with were these small instrumentals, although the organ heavy prog rock piece "Devil Church" is a little better than "Spöksonat". For a while I also wasn't into the vocals for "Mummy Dust". Musically it's wonderful, but I just felt like some of the whispers, mutters and lyric lines felt corny. Eventually I got over that, especially because I love the riffs, solos and synthesizers throughout the tune. Similar, the closer, "Deus in Absentia", while solid, isn't quite on the same level of quality as the other six tunes. Otherwise, Meliora is phenomenal, it's such a fun and meaningful album despite any of its silly eccentricities. The production is polished but potent for the market the band was playing to, since by this time the guys were already circulating on the radio and internet a lot more than you would have thought. Every note, every beat mixed exactly as they needed to be, and yet, despite the accessibility of the record, I never found it mindless, cheap or shallow in anyway. Although the lyrics are set up as your normal verse/chorus refrains like in any pop or rock song, they manage to craft these hypnotic lines that mean a lot in context, like 'I can feel the thunder that is breaking in your heart/I can see through the scars inside you', or 'All those things that you desire/You will find here in the fire'.

For what a clean cut, friendly guy Tobias seems to be, he certainly has his sinister side! And we're all the richer for it. Now I know that Ghost has developed into a rather contentious band, and sure enough they bring out a lot of mainstream music influences from the 60s, 70s or 80s that might not be all that exciting for those who were more into the Mercyful Oyster Cult influences, or just for folks who don't want any sort of pop taint or accessibility within their music. I can understand it. What's the big deal, right? Well as someone who has always enjoyed occult rock, pop, prog rock, and heavy metal, I just really appreciate how these Swedes transmute them into a consistent style, which can maintain all the constituent variability of these genres and still come off sounding like a single band. I also don't mind having the occasional band most of the 'squares' in my life can hear in my car and get into; they don't always take well to my Icelandic black metal or cavern core addictions. And maybe it's a superficial thing, but I also love the subversion of such catchy and occasionally 'friendly' metal carrying its Luciferian undertones, a philosophical inversion of pop music and poppier religion. I mean, only Odin is real, but the Devil can be a hell of a lot of fun.