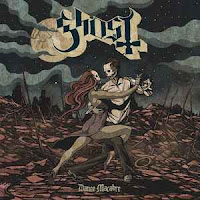 Here's another digital Ghost single which was of interest to me because it featured an electronic artist I enjoy doing a number on one of Prequelle's singles, "Dance Macabre". Like a lot of that album, I do like the original song, I remember it standing out as semi-unusual in that it felt almost like a hybrid of disco and 80s butt rock, the sort of song you might expect more from Speed Strid and his Night Flight Orchestra than Tobias Forge. It manages to pull of an extremely familiar feel to all of us that survived the 80s, and lyrics that don't exactly live up to some of the Swedes' other work, but nonetheless it was catchy as hell and I listened to it a few dozen times despite the goofy video that went along with it, which can be forgiven since about 99% of all music videos are rubbish.

I'm going out on a limb here to say that I actually dig the Carpenter Brut remix of the song just as much if not more than the original. This is the Frenchman responsible for "Turbo Killer", setting beats for and starring in one of the remaining 1% of music videos that actually fucking rules. While his augmentation of the Ghost tune isn't quite as dramatic or extreme as some of his own tunes, I like the throbbing roller skate-ready synths he mixes for the bass line in the verse, as well as the more exaggerated, very retro radio synthesizer pads, and the reverb he throws onto the vocals. I have quite a lot of fun listening to this, even the slightly more atmospherically enhanced chorus with a couple of slightly acidic tones on top. The synth solo just about matches the guitar solo in coolness, and it's just a well done adaptation which knows what its about and doesn't need to force the envelope too far.

Now, as an overall value, this single isn't much. It's just that remix, plus the album cut, which is not necessary since you could compare it to the one on Prequelle. So it's a fairly useless release that just happens to feature a remix every bit as enjoyable as the one Health provided for "He Is" on that tune's expanded digital single. Perhaps Carpenter would be a trendy pick, but the fact is that he handles this material with respect, injecting just a fraction of his own persona while letting the original structure of the song thrive, and you couldn't ask for much more. It's not much of a product but if you like both of the artists then certainly listen to it online.