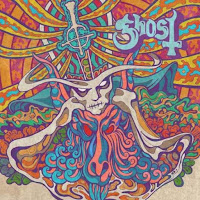 Ghost has proven to be such an ever-evolving species of band drawing upon multiple eras of heavy metal, hard rock, prog rock and psychedelia that you can never quite predict where Tobias Forge is headed next. Once I saw the gaudily bright colors that would provide the cover for Seven Inches of Satanic Panic, a limited edition, wait for it...7" record, I kind of figured he'd be taking us back on a tour of the 60s, or rather the 60s as filtered through Cardinal Copia's imagination. True enough, that seems the primary influence to these tracks, though he's definitely trying to keep them consistent with some of the other Ghost material off the latest two full-length albums, so the differences are superficial at best.

"Kiss the Go-Goat" is a slab of 1968 hard rock circa Iron Butterfly or Steppenwolf, with a stock, predictable, main riff drizzling acidic little leads and organs. Forge's vocals tether it directly to the Ghost canon, but there are a few differences like the mildly fuzzier rhythm guitar tone and so forth that I wouldn't mind hearing an entire album based around. The chorus and bridge definitely feel like other songs you've heard by the Swedes, and overall I was left slightly wanting for some catchier nuances here...for all its experimentation at dialing back yet another decade, this one doesn't have a lot to stand on. "Mary on a Cross" is more somber and atmospheric, and strangely enough captures the nostalgia of the intended era more successfully, even though it's driven by a standard hard rock undercurrent like a "Dance Macabre", which is similar. But it's the vocal harmonies and the way the organs are implemented that sell it, and I like the little break where the beat disappears after 2:30 where it makes you feel like Tobias is crooning at a high school dance 50 years ago, before the rest picks right back up.

The production is pretty good, that's never really an issue on Ghost studio recordings, but I think the two tunes here are among the least impactful of their career the last few years. I don't mind them, but it's easy to understand why they'd be better placed on a novelty item like this EP rather than on a full length where the stakes are higher. Who knows, though, perhaps Forge was thinking of heading even further back in time, channeling earlier chronological influences, and wanted to send this thing out as a crowd test to gauge the reaction. To that extent, at least to me, I would consider it a success, as I think an entire album of better written tunes in this style might be fun...like a Strawberry Alarm Clock meets Ghost effort. But as far as its inherent value, I don't think I'd be including either of these on a playlist of my Forge favorites...most of the material on Meliora and Prequelle sticks with me more than either of these, although they were innocuous enough ear candy for a couple spins.