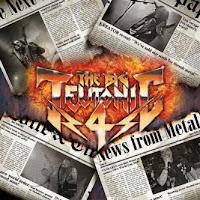 The original Big Teutonic 4 split was a fairly fun idea, so why not tap that well another time? That was Nuclear Blast's thinking as they rounded up the usual suspects for another go at some rousing NWOBHM covers. This time, each of the four thrash bands is taking on a different English forerunner, with only one of those bands (Maiden) being redundant with the original split. Raven, Saxon and Tank are all getting a turn to have some of their material in the spotlight. And once again, much of the material here has also been published elsewhere, so the value you're going to get out of it is pretty limited if you're not a long-term follower/collector of the German bands. As cool as it was to hear the slightly lesser known bands like Raven and Tank done justice, I was sadly less into this split than its predecessor.

Kind of like Sodom's cover on the earlier split, Kreator's version of Raven's "Lambs to the Slaughter" is one I've already been familiar with forever, since it came out on the Out of the Dark...Into the Light EP back in the 80s, and many represses of that with the Terrible Certainty album since. Sodom's contribution of Tank's "Don't Walk Away" is also an oldie that has been around since the days of the Agent Orange. Both are solid versions but they don't really change up the formula all that much, maybe in Mille's case but even he is trying to emulate some of the Raven screams with mixed success. I feel that Destruction's rendition of "Princess of the Night" is more of the transformation you want to hear when a thrash act is covering some trad metal, but it also comes off a little goofy with all the vocals and backing vocals going over it, cluttered where the original is just so elegant, perfectly written and executed. Bringing up the rear yet again, Tankard is the one band doing something exclusive here, with yet another Maiden cover, this one a somewhat exciting romp on their eponymous "Iron Maiden".

Part II sort of falters with the first two tracks being pretty obvious covers that aren't news to anyone, and Destruction's is once again a bonus track from various versions of Spiritual Genocide. Since these three were all pretty saturated in exposure and easy to acquire, I think this is less of a value than the first time around, which was already a debatable value. So once again, hardcore Tankard fans will benefit the most from having it. What's the most disappointing though is that the label and bands could have taken this idea and done something really special with it, like new original material...an 8 or 12 track 4-way Teutonic split with 2-3 new original cuts from each band would sell like hotcakes. But this just seems like a lazier followup to something that already generated a little cash flow and it shows in both the selection and the product.