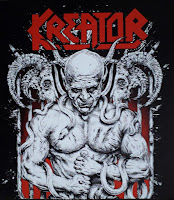 For the Hordes is another CD EP included with an issue of Legacy Magazine, which seems to have cornered the market on German thrash bands putting out exclusive audio souvenirs in the last decade. There isn't a whole lot to this one, just three live tracks, and a rarer studio cut that you can only find as a bonus track elsewhere. Even the lives aren't all that exclusive, since they're part of a more substantial release coming out in 2020, so at the best this is the sort of thing you might find while perusing and think was neat if you're into the band, but the process in putting it all together didn't demand much effort and neither should anyone but the most ardent Kreator fan put any effort into tracking it down for his or her collection.

Now the live songs do sound quite good here, plucked from dates in places as far abroad as Chile, the UK and the Masters of Rock festival in Czechia. Hellish, energetic and very clear sounding, they sound as aggressive as you want them to be, with "Hordes of Chaos" and the more melodic "Fallen Brothers" standouts, and then the legendary "Flag of Hate" finishing up the trifecta, and that one did not translate quite as well in some sections, partially because it's being broken up for crowd interface. The final track, "Earth Under the Sword", is actually really great, it was released as a bonus track on a bunch of versions of Gods of Violence, and even had a limited 7" single put out with Decibel, but in my opinion it should have probably been a main track on that album, it's energetic and has a little bit of cinematic atmosphere created through some sparse orchestration which manages to help it feel urgent and powerful without intruding on the core instruments or vocals whatsoever.

If you like collecting metal magazines, this EP is a nice little nudge in the right direction, even though all of its content will inevitably be made redundant. In that regards its very similar to the Chosen by the Grace of God of EP which also featured in this magazine, just a little lighter on the actual content. I certainly don't need it or recommend it beyond its nature as a collectible, but if you hadn't heard "Earth Under the Sword" somehow and you want quality live recordings you could do a lot worse, and at the very least it has me psyched that London Apocalypticon - Live at the Roundhouse should prove to be a potent enough live album come Valentine's Day, when you know all you want is to thrash. Partner optional.