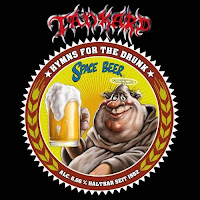 The third in a trilogy of absolutely worthless compilations cashing in on the good Tankard name, Hymns for the Drunk is another unjustifiable release in the age of the cell-phone, the internet, the streaming service, where any fan of the band can put his ripped (legally or illegal) alcoholic thrash tunes into a random playlist and generate much the same result. While Noise and Sanctuary were the first two culprits with their Hair of the Dog and Oldies & Goldies anthologies, here it is AFM reprinting material from the Germans' five-album tenure on that label, including B-Day, Beast of Bourbon, the wonderful Beauty and the Beer, Thirst, and Vol(l)ume 14. They even include some stuff from the Best Case Scenario compilation which was already made up of re-recordings of early 80s material from the Noise Records years...yes, that is the sound of me smacking myself upside the head with a big fat mug of fucking nothing.

Now most of these albums were solid or better when originally released, and the material has not aged too poorly for a guy listening to it being reprinted in 2018, in 2020. The production is fairly even across those albums, so frankly a lot of the songs could have just been swapped between them and none would be the wiser. "We Still Drink the Old Ways" is present, my favorite Tankard tune of the 21st century, so at least someone had some common sense. Surprisingly, there are a lot of 'clumps' taken from the albums, like two tracks in a row on the original track lists that are also placed here in a row, somewhat chronologically. And most of the AFM new studio albums get 2-3 tunes, while the Best Case Scenario has four tracks, one of which is a medley...so even here the focus is on some of the same earlier material from older compilations, only the re-recordings, which as I've covered elsewhere, were completely unnecessary and lacked the charm of the originals in favor of a more streamlined studio presence with their 2000s fare (this worked well enough for Destruction but I really couldn't get into Tankard's attempt).

So what really can I say positively about this? If you've read my rants over money grubbing wastes of space like this, you know what comes next. If Hymns for the Drunk were being handed out at AAA meetings or elemental schools for free, to preach the golden gospel of Tankard, as righteous a faith as any, then I might go soft on it. But this is a product that'll set you back $15-20, entirely without any merit since any n00b interested in the Kings of Beer can just sample them from any number of sources, officially approved or not. The cover art is kinda cute maybe, or it would be as a beer coaster, but I mean unless this thing came with an actual functioning TAP attached to it, there would be no amount of gimmickry to overcome its vacuousness. There were no bonus tracks that could have been dug up from these AFM years, no rarities, that could have made this worth a piss? Why is this beloved, legendary band treated with such awful and ineffectual anthologies?