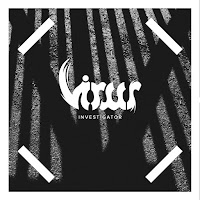 I was somewhat disappointed when Virus announced they were going to break up in 2018, and when I heard the year after that their alma mater Ved Buens Ende was reforming, I continued to be bummed out. While I do enjoy that older band, I felt that Virus took some of the same sonic concepts and further extrapolated them into more interesting material, groovy and dissonant, progressive melancholia that was honestly one of the best examples I can think of when you throw out the idea of 'modern' metal. It's not that the band had no precedent, there's a healthy heaping of Voivod's guitar style in the mix, as well as in the groovy, driving bass lines, but they had this really introspective, almost laid back, urban vibe to them that was truly refreshing. In the end, they did give us four great full-length records, and I'm excited enough to hear what future Ved Buens Ende recordings might sound like, so it's hardly the apocalypse.

Their final recording as Virus was this two-track EP which felt like a marginally more roughly produced extension of Memento Collider. "Investigator" itself was one of their bassiest tunes yet, with loads of thick lines cruising along as the primary instrument while the drums splashed along in the background, fused with cleaner-toned guitar tones that create that ever-weird atmosphere the band is so well regarded for. Czral's vocals continue in that monotonous, wastoid timbre but take a clear back seat to the instrumentation. "The Blue Flags of the Dead" is a slower paced track, where the guitars stand out a little more but the bass is just as thick. There are a few organs and harps in there which mesh rather well with the atmosphere, and I loved the churny, choppy bass lines playing out under the vocal passages near the center of the track. Both tunes are pretty good, if not the best stuff the band had released. They certainly in a way felt just as complex, if not more complex than the material on Memento Collider and Oblivion Clock.

I've only heard this digitally, and assume the 7" is quite hard to find, and so as a swan song it's kind of underwhelming, and I've heard almost nobody ever talking about it. However, if you enjoyed their run from Agents through Memento Collider then it doesn't hurt to have a little more of the same, and these tunes are at least close to worthy of that magnificent output.