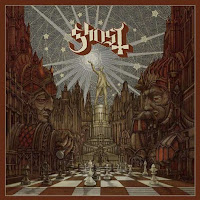 Popestar is anchored by "Square Hammer", the band's most popular non-album track and one of their most popular in general. Apart from the fact that the tune's central riff/melody reminds me a hell of a lot of a heavy metal version of "Message in a Bottle" by The Police, it's a pretty good tune that escalates into a satisfying chorus. About half the Ghost fans I know out in meatspace actually got into the band through this song initially, so there's obviously something to it, although I wouldn't consider it among their top tracks. I did dig the noir horror-like video that went along with it almost as much as the music itself. Fortunately, like If You Have Ghost, this is an EP primarily built from cover tunes, an area Tobias is decently strong with, and like that release, they've made some interesting choices here.

They handle Echo & the Bunnymen's "Nocturnal Me" rather loyally, keeping the similar, solemn textures but inserting a few doomier guitar lines in there to personalize it more towards their own material of the Meliora era. I especially like the ending with the busy drums and the mildly heavier prog atmosphere. The other cover I was familiar with is "Missionary Man" from the Eurythmics, which once again gets a heavier jump start due to the presence of the guitars. Musically I was on board with this, it works well with those chords churning it along, but I felt Papa's vocal here was far too nasally and distracting, especially as he is delivering it in a rather monotonous tone. Not that it's terribly distant from the original, but Tobias Forge is no Annie Lennox, as I'm sure he is aware, and we'll leave it at that. As to the other two tracks, I was unaware of the originals and so I had to go back and listen through them online just to make some comparisons. "Bible" by Swedish 80s rockers Imperiet is played quite close to the original, vocal harmonies and all, and in "I Believe", Ghost takes an English electro-pop cut from the 90s and reduces it to a more purely ambient piece with the shimmering synthesizers and Forge's voice leading it along...

That was a pretty interesting adaptation, but having now heard the original I was kind of missing all the little bleeps and beats that carried the dance version, which was basically a British New Wave track done a decade late, but hey at least it was an introduction for me. Overall, I think the choices here are pretty curious but not always as triumphant as I would have liked. "Square Hammer", itself arguably a half-cover of another famous track, is the main reason to return to this one. David Brinley's artwork is nice, architectural, imperious looking, which sits nicely aside his cover for the Ceremony and Devotion live album and Zbigniew Bielak's cover for Meliora. All the material, original or covered, is produced with a pretty safe poppy mix that emphasizes what it needs to. I'm sure this is sitting in most of the Ghost audience's collection already, but if you haven't already got it, try and grab the 2CD version of Meliora which features this is as the 2nd disc and possibly save yourself a couple bucks. On its own, the value is debatable.