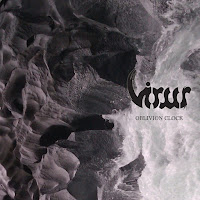 At 30 minutes duration, Oblivion Clock is fairly substantial for an EP, it's also a treat because it gathers not only a quartet of new tracks hot off the exhaust of their masterful 2011 album The Agent That Shapes the Desert, but also has a few added tracks that were only available through the double-vinyl release of that record, one of which is a cover tune, as well as an unreleased song from back on the Carheart recordings. What's more, the material here is almost all album quality, tracks that would have been just as worthwhile had they been released with Agent or Memento Collider. There are a couple exceptions, where the band experiments a little further out to left field than normal, but at least four of the seven tracks are superb...

And in most of those cases, they're tunes that drudge along a little slower, but with the familiar, groovy bass lines, and a little more of a wall of discord to the guitars. New tricks are keyboards are implemented to great effect, almost choir-like in their swells, and as is normal for Virus, the combination of those intricate, flowing bass parts, morose almost spoken-world vocals and eerie guitars is unnerving and unforgettable. "Inverted Escape" moves along at a pretty quick pace, but it's so dense with ideas in the guitar lines and grooves that it demands repeated listened to really ingest it all. "The Pull of the Crater" is really creepy with those warped, almost orchestrated effects creeping along to the jangling rhythm guitar and wailing ambiance, possibly my fave through the EP. The other tune I dig (from the Agent double-vinyl) is "Saturday Night Virus", a pumping, playful tune that stays true to its title with a disco-like momentum dowsed in all the Norwegians' strangeness...this one could be like some trippy answer to Primus or Mr. Bungle, but despite its upbeat perkiness it's just as compelling as the more serious fare.

The one that didn't quite succeed for me would be "Gaslight Exit", sort of droning, raw, guitar track, the most experimental anywhere here, but while the bevy of daunting tones is itself interesting, they don't do much of note with it until the end when it begins to resemble Virus proper. The cover of the Walker Bros' "Shutout" is kind of fun, like Virus getting all bluesy and proggy in a dimly-lit, smoky dive bar in the wee hours of the morning to an appreciative but half-drunk audience. One wonders what these guys could have come up with if they dug through a broader array of covers and gave them the same sort of treatment, bending them ever so slightly into their own sound palette. Oblivion Clock might not have been meaty on its own enough to fill the 4-year gap before Memento Collider would arrive, and its not completely consistent, but paired up with Agent it was more than enough to believe that they still had some distance in them, and its highly recommendable to anyone who dug the full-length albums leading up to it.