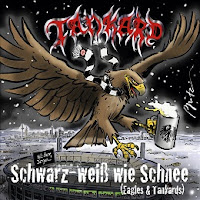 Tankard, football and alcohol have gone hand in hand in hand for pretty much the band's entire existence, culminated in the original  Schwarz-weiß wie Schnee EP back in 2006 through AFM records. Now that the band's enjoying its latest stint with Nuclear Blast, they've decided to go and 'update' that, gracing us with another limited edition CD and 7" EP which was presumably just as much a forgettable novelty as its predecessor. They've fattened this up with some other studio material we've already heard, a live gig, and of most interest might be another sports tribute bonus track which was available only as a video and a bonus track to the band's solid 2014 LP Vol(l)ume 14, which was coincidentally their last with AFM.

The punkier mix of the original "Schwarz-weiß wie Schnee" is reinforced with a more grandiose rendition, with audience participation and a more anthemic production. Of the two, this one feels like it's being played at you right from the stadium, and in fact that's where the video takes place, with an entire arena full of football fans cheering along...now to think, if only every person in that audience was buying Tankard records, they'd be the biggest thrash band in the world! So that is at last fun to see, that the band was allowed to perform this (possibly numerous times). Now I don't know much about Euro professional soccer, and to whether this is a really big deal, I'm a World Cup/national team guy, but it certainly looks like the band is jazzed up and sure they fucking deserve it. However, I think in terms of digesting the track, I prefer the original incarnation which sounds like it might have been lifted off an old mid-80s punk album only injected with some slightly thrashier guitars. But hey, you can compare and contrast them and choose for yourself.

Apart from these two versions of the same song, the EP is padded out with the studio title tracks to their albums A Girl Called Cerveza and One Foot in the Grave. Both good tracks, but rather useless except as random filler that I presume they wanted to expose to football fans that might like hard rock or heavy metal and haven't already heard the band until their football anthem. Their other sportsy tune, "Forza SGE", has been reproduced here from its status as a Vol(l)ume 14 bonus track, and it's another punk rock spin with shoutalong vocals and it basically just sounds like a bunch of drunken hooligans. No interesting riffs or anything to be heard. Finally, there's a live version of "(Empty) Tankard" live, another punk-charged piece that goes well enough with the other content, but it's kind of a murky, subdued live mix. So ultimately, there's not enough new or interesting here to recommend at all unless you are dead set on getting that new version of the football song, and even that isn't so great if you're not in the audience cheering before the kick-off or half-time. The original EP is nothing to write home about, but this is even less of a curiosity, a product that doesn't need to be.