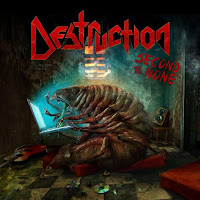 Here is the sort of wasteful musical product that I'm honestly surprised can still exist in modern times, a split 7" commercial double-single that gives the fanbase nothing it's not going to acquire elsewhere in a more substantial form. What you've got here is basically the title/lead-in track to Rage's The Devil Strikes Again album, and one cut off Destruction's Under Attack, both of which were being promoted around the spring and summer of 2016. Print them up on limited edition 7" vinyl, 1000 copies, a couple different colors to bilk collectors with serious acquisition disorder, and turn just the tiniest bit of profit...not nearly enough to justify a product's reason for being.

Now I love both of these bands...they've each been in my life for over thirty years. Had some effort been put into this to create some exclusive tracks, maybe have the bands covering each other, or creating more of a joint effort, you could have had a nice little fan package. I thought that the art for the Destruction side was really cool, possibly the only positive thing I have to say about this. As for the two songs, they match up well enough, as it's one of Rage's angrier modern style tracks which has just enough power behind it to hang in there with the more complex thrash of their countrymen. But each is far better experienced in the context of the other material written to be released along with it. There's simply no justification for this product independent of that. It's just as worthless as any old single which is cut & pasted from its respective album release, with no unique bonus content, not even any live or rehearsal cuts, cover songs, nothing.

Why bother in 2016 when the anxious audiences of the bands can just sample the tunes on their phones, their PCs, or whatever other devices and then go and grab a digital or physical version of the album? This shit is just useless. Any and ALL points I give to this are simply for the artwork of Gyula Havancsák, the Hungarian musician/artists who did the Destruction side. The rest is just needless Nuclear Blast excess from a label that has kept up with the times and thus I would assume should know better.