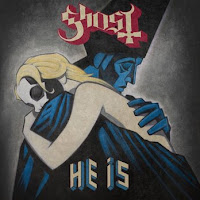 As one of my favorite tracks off the Meliora record, and by Ghost in general, I was pretty curious to explore this digital maxi-single which features four different versions (thankfully excluding a repeat of the original album mix). "He Is" plays like a perfect mockery on some Christian arena rock power ballad, gone from rich, glimmery acoustics to a potent, memorable chorus, electric leads and just an uplifting proof of concept for Tobias' Luciferian lyrical themes and the band's ability to weave classic rock styles onto a present day audience. That being said, the various alternate takes on this tune don't quite hold a candle to the studio one I was accustomed to, as is obvious by how well that one comes off live...

...on the very first track on the single. Possibly an error in judgement, since I think that could have been shoved off to the close of track list, but since this is just distributed digitally it's not like a lot of listeners are going to have any loyalty to a perceived ordering of its presentation. Yes, the live cut recorded in San Francisco is quite good, with the guitars and vocals up loud and front, sounding awesome, proof that Forge can largely pull this all off in the moment. Most of the instruments sound close to studio perfect, the climactic chorus retains its power and the audience roar is kept strictly to the backdrop, almost as if it were sampled in there where tolerable. The second cut here is a more directly acoustic piece, without the electric swells, and featuring Allison Mosshart of The Dead Weather and The Kills. Her style is definitely a little more grainy and emotional in her voice, but I found she was a little overpowered by Tobias once they were singing in duet, and although this plays more like a 90s alt-rock version of the tune it didn't hold a candle to the album cut.

After that, the selections become a lot more interesting...the "HEALTH remix" is a pulsing, rave version which lowers the pitch on the vocals and then becomes a rather mid-paced, atmospheric ambient piece that would be perfect to listen to through a sunrise. Aside from a few throbbing, sparse beats, this one never just goes outright techno, and while I was expecting it to, I was surprised that I preferred it just to stick with this rich, ambient texture with the more ominous vocals. The final version presented here, the "Haxan Cloak Remix" is a far more industrialized version with some more abrasive, noisy electronic sounds after a more ambient intro. I loved this one at first, thinking it was just the whole track being minimalized into these strings, keys and other ambient tones, a gorgeous reduction, but I was a little less interested when they were throwing the subdued vocal samples back in under the ear-rupturing, dirty synth explosions later on. Still, it's good for a few minutes.

Overall, it was curious to hear the different approaches in contrast with one another, but only the "HEALTH Remix" with its L.A. rave inducing-euphoria is one that I'll find myself running back to. The others are pleasant, especially the opening sections of the last remix, but there's never a need for me to listen to them over the album version. I think it was pretty wise to leave this sort of thing as a digital download for the diehards, and it's harmless enough, but mostly just an oddity with one real positive. The live track sounds great but you can also just hear that over on Ceremony and Devotion, a full live album that I'll cover soon.