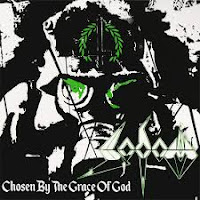 Chosen by the Grace of God is another of the many limited run CDs included with European metal magazines as an exclusive, which, to be fair, is pretty strong marketing for the dwindling print industry these days. Sometimes these are splits, sometimes live sets that aren't available officially elsewhere, and if you're really lucky, it's a bunch of material from one band that might include a few things you don't already own elsewhere. These are often longtime metal veterans, in particular thrash, and Sodom's Chosen by the Grace of God is absolutely an EP that is targeted towards collectors based on the exclusivity of some of its content, and those will be the persons who get the most value out of throwing a few Euro at the German Legacy magazine with which it comes, although there is a little bit of redundancy here with other products.

That redundancy is "Down On Your Knees", a track that serves as a preview for the band's latest 'official' EP Out of the Frontline Trench, which is out through Steamhammer in several formats. As I'm also going to cover that release, I'll focus here on the more exclusive content. There's a live cut of "One Step Over the Line", a track that has appeared on numerous Sodom releases in the past, and it sounds loud and chunky, punchy and effective even if it's not among their better material. "Predatory Instinct" is a great number, invoking the energy of albums like Agent Orange, and a good bonus if you don't have one of the versions of Decision Day where this belonged as a bonus track. Like that album, and several of the band's myriad EP tracks in the last decade, this one shows the band is still on a roll and just as energetic as ever, even if not's the catchiest song in their canon. "Lifeline" is a very cool cover of an earlier tune from England's Sacrilege, back when they were more of a punk grind band before their mutation into atmospheric heavy/doom. Sounds just as natural in the hands of these Germans as its originators, and they put an angry, pulsing spin on it.

The last little perk you're getting here is the track "Inside My Crosshairs", which was originally from the split 7" they did with fellow Teutons Running Wild, for yet another magazine exclusive in Rock Hard a couple years ago. Another solid thrasher with a few cool parts to it, possibly my favorite that is actually on this release. So when it comes to value, this one will really depend on if you're a big collector and own a lot of these more obscure recordings which also featured most of its content. If not, and you're just a Sodom fan who subscribes to professional print zines, then I'd say this is fairly neat, the live and cross-EP tracks aside. The material is consistent and engaging enough that I have confidence Sodom's win streak should continue beyond just Decision Day. I just hope we don't have to wade through another half dozen EPs before we find out! As an added note, the same issue also has a compilation CD with some more underground bands on it, a few recognizable, so it's clear the magazine wants to supply its readership with substantial bonus content and that is to be lauded.