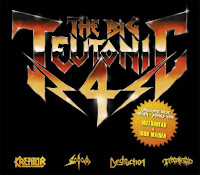 Now here's an example of a split release between numerous thrash metal luminaries which, at least on the surface level, seems rather an interesting one. I agree completely with the designation of these four bands as 'The Big Teutonic 4', happy that Tankard was at last being counted among them (I'd been doing so since the 90s when it was clear they were persisting where others faltered). This was yet another CD being issued exclusively through the Legacy magazine out of Germany, but Nuclear Blast also released a version of it some months later, so...not so much. What's even more curious, is that this doesn't feature original songs, but rather covers of two titanic English bands in Iron Maiden and Motörhead, with two German bands taking on each of them. Unfortunately, most of these are NOT exclusive to this split, but taken from various other singles, past albums, or previously issued bonus tracks, by the respective artists.

The most obvious of these is going to be Sodom's handling of "Iron Fist", which we'd already heard as far back as Persecution Mania and even live on Mortal Way of Live. It's a classic, in the hands of either its originator or Tom Angelripper, and a natural cover from a band that draws so much of its own style DIRECTLY from those NWOBHM road-dogs, however at the same it was the inclusion I was least interested in, having heard it many times before. However, Destruction's cover of "The Hammer", which was only included with the Japanese version of Spiritual Genocide (that I had not heard), is quite nasty, Schmier plastering his version of the vocals all over the punk-fueled speed metal massacre. It's also a little messy in the right ways, not as tight as the original content those Germans were putting out, but that's fine in the context of this particular cover. Another of my favorites here is Kreator's "Number of the Beast", not the first time they've taken on Iron Maiden, but even though the music plays pretty close to the original, it sounds great with Mille's harsher vocals, and I loved the lead sequence. This one is also located on the later Violence Unleashed EP or the Phantom Antichrist single if you're trying to track it down elsewhere.

The thrashier version of "The Prisoner" that Tankard includes is also a good one, filthier guitar tone and filthier vocals via Gerre, but they still touch on some points of atmosphere that you wouldn't expect from the German drunkaholics. And as far as I know, this is the one cover that is only available on this particular split, at least for now, so if you're a Tankard collector, you've got the most motivation to snap this up. Now, if ALL of these songs were exclusives, then I'd say this was a CD or vinyl that almost anyone would want...the songs are all good, even if Sodom's contribution is a bit too redundant. And to be fair, many fans might not own most of the tunes elsewhere. It's a fun concept to round up these thrashers, legends themselves, and then watch as they don't toot their own horns, but cover even mightier legends of British heavy metal. If you can track one down, it's pretty sweet to have on your wall, even if the content isn't all that valuable. Not a necessary purchase, but neat if you've never run across these covers before. And to think, Nuke Blast and these same four bands would be doing it again in just a couple years...