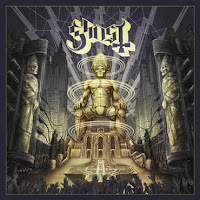 As slick and polished as Ghost comes off on its studio recordings, the band was pretty much built from the ground up to excel in the live setting. The costumes, the characterizations, the set pieces, and the sheer accessibility of their material lends itself well to the good old sing-along, and lyrically and emotionally they touch upon a number of cornerstones of individualism and rebellion that will appeal to both younger and older audiences both, the former smack dab in the middle of that time of their lives when it all matters so much, and the latter because they remember when it did for them. Theatrically, if not musically, they've got a lot more to bring to a gig than your average quartet of guys in black clothing, not that there is anything wrong with a quartet of guys in black clothing, most of the best shows I've ever SEEN are 4-5 dudes in jeans and black t-shirts, but it's nice that we've got some acts out there who take it a little further over the top and justify those ticket prices. I mean I'm right by your side watching the local death metal bands, but I like to check out some fuckin' KISS, King Diamond and Alice Cooper too.

Now, naturally, an audio live album isn't going to be able to convey that whole experience, and that's one of the obstacles Ceremony and Devotion faces. You're getting some cool new cover art, some photos, a list of tour dates, and a pretty well-recorded physical proxy for attending and listening to them perform. You're not getting a single, complete performance accompanied by a DVD or Blu Ray of that gig, which I think would have been a far superior product for the fans, especially those who haven't gotten to attend one of their tourdates. This is material pulled from several different dates, curated to provide clear, consistent sound quality and crowd buzz and prove that they can largely emulate their studio offerings, which they more or less do throughout this selection. 15 songs, the vast majority of which I enjoy, the only exceptions being a couple like "Per Aspera ad Inferi" or "Body and Blood", but even those sound fluent enough in the live setting. The material is drawn fairly evenly from Opus Anonymous, Infestissuman, Meliora, and "Square Hammer" from the Popestar is the opener, so a lot of my favorites like "Con Clavi con Dio", "Cirice", "He Is", "Year Zero', "Monstrance Clock", "Absolution", and "Ritual" are present and accounted for. No complaints there.

The songs do lose a bit of power on this recording as compared to their studio counterparts, by which I mean the band is so devoted to playing so cleanly that I got a more sterile reaction when listening to these versions. I wouldn't have minded some more flaws and imperfections if they had a slightly dirtier live mix, or changed the material up a little more to give the audience something more novel. The guitars here sound a little constrained, although they pull off all the parts well enough. I think as the tunes move more towards a climax, as in the chorus to "Year Zero" when they've got the choirs, the band firing away, the bells, and so forth, it does come together rather nicely, but there are some points where certain instruments seem subdued, or Papa's voice, while crystal clear, just doesn't carry the same effectiveness you'd expect. In fact he sounds a little too dweeby in some parts with the cleans, but where he might spit out a lower, growled tone it's more potent. That said, this is what's going to happen when you're curating tunes from separate gigs rather than just delivering all the sincerity and bluster of a single performance (although I've read somewhere that many of these were taken from the same show).

Ceremony and Devotion is professional, unquestionably, and most of my complaints here are rather minor since the audience sounds like its having a good time, and the band clearly puts a lot of effort into the performances. However, this isn't one that I'm going to be taking off the shelf to experience in place of their studio offerings. It's not a case like Live Without Sense or Live After Death where I want to specifically listen to that recording, even though I think most of the set list is fantastic and it's a decent overall product in terms of packaging and audio quality. Had it come with a DVD to match, I'd probably give this a boost, it really could use one, but as it stands I think it's just decent enough to give a passing grade.